Several weeks on from taking delivery of the Mazda3 and my first impressions have proved lasting ones. 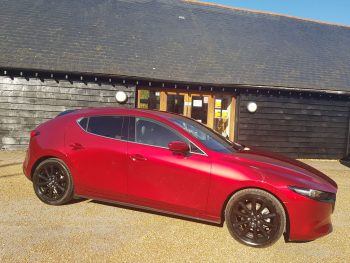 I’ve not stopped feeling like I’m in a premium model; a sentiment also carried on by the rather striking interior, where the quality and materials are top-notch.

The Mazda3 is undoubtedly a head-turning car that gets a lot of attention on the road and in car parks, particularly in our optional Soul Red metallic paint.

Unfortunately, such a focus on its looks did lead me to wonder whether a crack that suddenly appeared on the front-end was the result of unwarranted attention, or an actual hit and run in a car park, or the result of an unfortunate run-in with a squirrel on the A380. As nothing had happened to the car while we were in it, we’ll never know but it ended up going back to Mazda to be sorted. It’s back now, looking pristine and much better than the squirrel did.

Another attention-grabbing element of the Mazda3 is its 180hp 2.0-litre four-cylinder Skyactiv-X engine, which joined the range last year. It’s been a key industry talking point since first announced three years ago as it’s been developed to switch between spark and compression ignition as needed, offering the free-revving performance of a petrol, but with higher torque and diesel-like fuel economy and emissions, supported by 24V mild hybrid tech.

It’s certainly more torquey than conventional petrols; it’s slightly slower at pulling away than I’d expected but great once revs build. The lack of lowdown grunt might also explain why I keep stalling it when driving away.

You do also need to rev it a little at speed and there’s a bit of gear work needed on inclines; frankly no hardship as the six-speed manual gearbox is a delight to use.

I’ve not tested the 122hp 2.0-litre Skyactiv-G petrol mild hybrid with cylinder deactivation, which is the only other engine for the hatchback, but the Skyactiv-X’s improved fuel consumption, lower emissions and more torque make for a compelling argument. It’s also the sole engine offered in the saloon.