Jonathan Musk reports on the XF’s performance and economy. 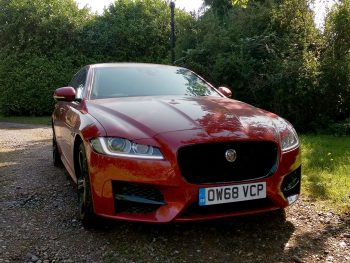 Our long-term test result of 41mpg is only just below the official 44.1mpg combined figure

Jaguar’s going electric! In our digital age and following the success of Jaguar’s excellent I-Pace, the next XJ saloon is confirmed as being electric. However, until that car arrives in 2021, the current line-up is suffering from difficult sales. What’s all this got to do with our XF? In a nutshell, it’s now a model that’s feeling its age, especially in light of the competition’s recent updates (as described in my last report). But the XF is still very much a relevant fleet mile muncher, providing an involved drive and reasonable economy – our long-term test result of 41mpg is only just below the official 44.1mpg combined figure – from its 2.0-litre engine with 180hp. Other engines in the XF line-up include the low-power 163hp or 240hp diesel, or the 250hp or 300hp petrol – so the 180hp provides the sweet spot between performance and fuel saving, and price, though unless you really need it, I’d suggest ditching the AWD.

Given our car is the R-Sport trim variant, the 180hp diesel also makes a decent go of providing acceleration to match its racy looks, with 0-62mph despatched in just 7.9 seconds, on to a more-than-plentiful top speed of 136mph.