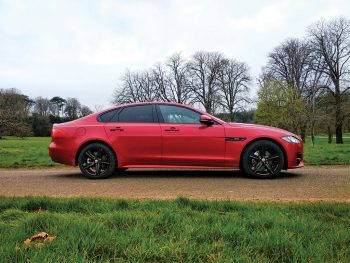 The XF has proved very frugal over the last six months

The XF has impressed with its blend of luxury meets frugality from its now well run in 2.0-litre diesel engine. This has resulted in a 43.6mpg average over the entire six months. Much of that mileage was around town too, so it wouldn’t be difficult to better that figure if hammering down a motorway is its intended use. On that front, I regularly see mid 60s.

Admittedly, it could have been even better still with the RDE2-compliant RWD version, but our AWD variant was a godsend when the recent biblical rains fell and the UK got a thorough soaking. It is also the sensible choice for towing, of which I’ve not done any, but the XF rightly remains one of the UK’s more popular cars for towing.

However, when looking at the specs vs pricing, the XF can be a touch difficult to justify for fleets looking for the best bang for buck in this sector. That argument changes with the current taxation benefits garnered from the aforementioned RDE2-compliant engine though.

The Jaguar has also proven itself against German rivals too, which although are perhaps admittedly more modern and newer, aren’t necessarily any more appealing when it comes to getting in and driving home. The German cars offer huge technical capability, but that’s also sometimes to their detriment, whereas the simpler Jaguar does what it sets out to and does it well. It has earned its place in the Musk household as a reliable and dependable tool.