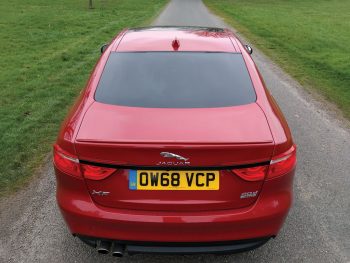 Brand kudos is a key consideration with the XF

Now that I’ve lived the with XF a few months, I can sit back and start to understand where it sits in the market.

As aforementioned, with RWD (not our AWD) it is still one of the few RDE2-tested vehicles that can see a fleet save big thanks to no additional 4% BiK nor increased first-year VED.

Nevertheless, the XF has stiff competition from usual suspects BMW 5 Series, Mercedes-Benz E-Class, a new Audi A6 and the recently launched Lexus ES.

While the Lexus’ trump card remains its hybrid powertrain, the German cars each benefit from ancient prestige and abundant technology, as well as classy engine line-up.

What does the Jaguar offer then? Well, it’s the best to drive (alongside the BMW) and it’s more simple than the others in the sense that it isn’t overbearingly complicated with expensive technology that you’ll never use, let alone understand.

And you can’t ignore the brand kudos either.