Julian Kirk reports back on our new Q7 long-termer. 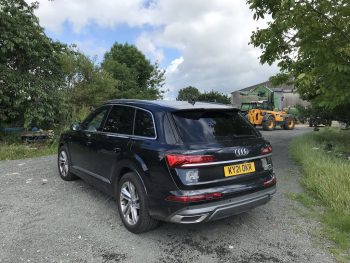 It’s a mark of how much cars have changed in recent years that the Audi Q7 no longer feels that big. When it was originally launched it was a behemoth, but nowadays it is dwarfed by models such as the Land Rover Discovery and BMW X7.

That’s not to say it’s small – inside it is cavernous and the boot is vast – but it doesn’t feel intimidating to drive… more like an A6 on stilts. And from behind the wheel you could be in an A6 because both models share the new Audi interior design featuring more touchscreens than PC World and a sombre air thanks to the extensive use of black inside. S line trim does bring some light relief with flashes of chrome across the dashboard.

But it is what’s under the skin that is important with this particular model – the small ‘e’ at the end of the name signifies this is a plug-in hybrid, offering a choice of pure EV (for up to a claimed 30 miles) or working in tandem with a 3.0-litre petrol V6 engine to deliver claimed combined economy of 108.6mpg. We haven’t had the chance to verify these claims yet but will update in future reports.

Our test model is pretty much standard, which means it has just about everything you could want, although on top of the £68,000 base price are a few options – metallic black paint at £750, a panoramic glass sunroof costing £1,850 which really lightens up the cabin, and a combined package of parking assist, comfort and sound packs at £2,295 which brings a host of niceties including an LED interior lighting package, upgraded Bang and Olufsen hi-fi, 360 degree camera and automatic parallel parking.