Our final report on the A6 Avant long-termer. 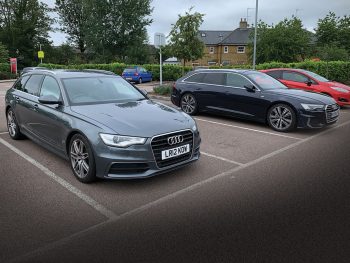 Sadly, the Audi A6 Avant has now left Fleet World HQ permanently, but not before I made the most of its 565 litres of load space.

First up was a biking trip with my son. This was the only time during my time testing the A6 Avant when the cavernous load area felt a bit challenged. I was able to wedge my son’s bike in my previous Volvo V60’s smaller 529-litre boot without folding down the seat – but no such luck with Audi’s curvier styling. Thankfully, the seat splits in three ways, but he ended up travelling in the front with the airbag off, due to seat belt issues. My wife and daughter ended following behind in our family car!

With the rear seat fully folded, I decided to make the most of the full 1,680 litres by filling the area with a pair of doors for my project Mini. I’m pleased to say that, despite their awkward size, they fitted easily and thankfully arrived at the sprayers with no further damage.

The A6 was a relaxing and surprisingly frugal companion on long drives, with a high-quality and well- equipped interior. But I felt we never really gelled during the couple of months we spent together. Why? Some of the tech in my opinion is difficult to use on the move, the leisurely auto box made progress slower than it should have been and the optional 20-inch wheels nega- tively impacted the ride.