By Julian Kirk / 3 years ago / Features / No Comments 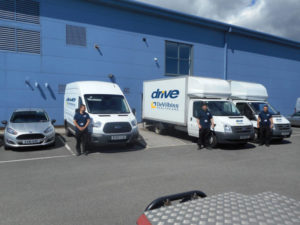 The Drive DeVilbiss fleet has more than tripled in size to 200 vehicles.

DDH supplies medical products to the NHS as well as community and nursing home sectors. It identified environmental sustainability as a key strategic area for development.

The company, which has locations around the UK in Bradford, Bridgend, Glasgow, Newcastle, Manchester, Birmingham, Bristol, Luton, Durham, Leicester, Brighton and St Austell, saw its fleet size more than triple between 2009 and 2016 to more than 200 vehicles. As a result, it created a ‘Green Team’; this team identified transport and logistics as a major area for improvement. The Energy Saving Trust was then invited to undertake a fleet review to identify how the company could reduce both carbon footprint and fleet running costs and improve environmental performance.

The results of the combined actions have been stunning: 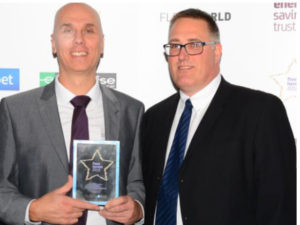 Commenting on the figures, DDH’s quality assurance and environmental manager, Roy Smith, said: “The need for sustainability at every level of business operations has become more prevalent. In the last 20 years there has been a surge in the number of businesses taking an active interest in reducing their negative effects on the environment.

“DDH has implemented many environmental changes. The initiatives DDH have implemented on the fleet have greatly reduced our impact on the environment and saved us money year on year.”

To achieve these figures, DDH implemented a number of initiatives. On the purchasing front, a large number of vehicles have been replaced by Euro 6-compliant models which are more economical and emit fewer pollutants.

DDH has also installed telematics devices in every vehicle as well as speed limiters in all service vans. These systems capture in-depth data on every journey and driver behaviours. As a result, the 10% of drivers who are seen to perform the worst behind the wheel (g-force monitoring is used to detect harsh acceleration, braking and cornering) are provided with extra training and guidance to help them improve. This is an on-going initiative taking place every month.

Also on the driver front, all new DDH drivers are trained in environmental driving techniques by the company’s fleet manager (a member of the Institute of Advanced Motorists). Additionally, more than 100 DDH and private drivers have attended and been trained through the Energy Saving Trust’s eco-driving scheme.

DDH has also improved journey planning – most notably between its service centres located across the UK. Delivery routes are planned to ensure vehicles are economically loaded and use a route which minimises mileage. Fuel card data is also monitored to help identify any potential savings.

A final part of the plan involved recording and reporting of service, maintenance and repair costs. Due in part to improved driving by employees (as well as newer vehicles on the fleet), the firm’s SMR costs have fallen from £16,563 in 2014 to £5,375 at the end of 2016.

As a result of the fleet initiatives, DDH won the 2016 Fleet Hero Award in the fuel efficient driving category.Heroes Wanted: Applications for the 2017 Fleet Hero awards are open until 20 September, with winners due to be announced at an event in the London Docklands Museum on the 9 November. To enter, click here.

Previous: Today in Fleet – Tuesday 15 August
Next: All you need to know about GDPR