A multi-agency operation on Devon and Cornwall arterial routes has seen both fleet drivers and their managers educated on better driving practices. 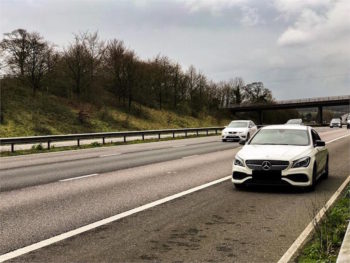 The operation included a focus on speeding

Dubbed ‘Operation Logjam’, the initiative was run by Devon & Cornwall Police Alliance roads policing officers and partner agencies on Thursday 13 December to clamp down on driving offences – in particular speeding – with a focus on light commercial vehicles.

Under the operation, 560 drivers, including private motorists, were subject to positive action, of these 132 were drivers of light commercial vehicles.

Illegal and dangerous driving practices recorded during the operation included:

However, all the breath tests conducted on drivers stopped for offences were negative.

As well as giving out formal penalties, the operation also put the focus on education and realistic scheduling by employers.

MPC Ralph Delbridge of the No Excuse Team, who led the operation, said: “We were able to offer discretionary words of advice to several commercial drivers. Additionally, Highways England staff conducted surveys with drivers as part of their ‘Driving for Better Business’ approach and will follow these up with company and fleet managers to further educate, not only the drivers but also the employers.

“This helps to ensure that employers are aware of the speed restrictions their drivers have to work within and to ensure not only that realistic scheduling is compiled, so that they do not have to speed between jobs or deliveries, but also that they take into account the Health and Safety of their driving staff. This further protects all road users from the risk of harm or serious injury.”