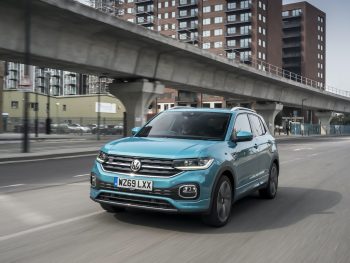 The new 1.5-litre TSI sits at the top of the T-Cross range

The T-Cross was launched last April as part of VW’s plans to offer an SUV for everyone, and initially offered a 1.0-litre TSI three-cylinder petrol turbo with either 95 or 115hp, joined by a 95hp 1.6-litre diesel in June 2019.

These have now been topped off by the new 1.5-litre TSI, which brings a swifter 0-62mph time of 8.5 seconds and a top speed of 124mph. It also returns 44.0mpg on the combined WLTP cycle while emitting 118-119g/km of CO2 (NEDC Correlated), depending on specification.

The new engine will be offered on the SEL and R-Line trims, and will be available exclusively with a seven-speed DSG transmission, bringing the number of engine and gearbox configurations for the T-Cross up to a total of six.

Prices for the 1.5-litre T-Cross starts at £24,910 RRP OTR in SEL specification, or from £26,810 RRP OTR for sportier R-Line trim. Standard kit on both includes front and rear parking sensors, Adaptive Cruise Control (ACC) with Front Assist, LED headlights and an 8.0-inch Discover Navigation infotainment system as standard, as well as two USB ports in the rear of the car. The R-Line trim adds sportier exterior styling, 18-inch alloys and a 10.25-inch Active Info Display for the driver.