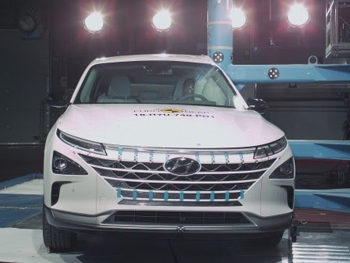 The Hyundai Nexo is the first hydrogen fuel-cell electric vehicle that Euro NCAP has tested, despite other marques producing fuel cell vehicles including Toyota and Honda.

The fourth generation Mercedes-Benz A-Class, the Mazda 6 and Lexus ES hybrid also achieved the maximum five-star rating. Notably, the Mazda 6 achieved one of the highest percentages seen this year for Adult Occupant Protection (95%), beaten only by the 2018’s top performer for safety, the Volvo XC40 (97%).

The Peugeot Rifter and its stablemates: Citroën Berlingo and Opel Combo; achieved 4 stars.

Michiel van Ratingen, secretary general of Euro NCAP said: “The fuel cell Nexo and hybrid ES point the way for future powertrains and Euro NCAP will work to ensure that safety performance as well as energy efficiency remain at the top of the manufacturers’ agenda.

“This is a satisfying set of solid test results and we are pleased that cars continue to perform well in the AEB tests, including for pedestrians and cyclists. It is very welcome to see manufacturers rising to Euro NCAP’s challenge of effective vulnerable road user protection.”

Matthew Avery, director of research at Thatcham Research commented on the Hyundai Nexo’s rating: “Its five-star safety rating should dispel concerns around how hydrogen fuel cell powered cars perform in a crash. With the Nexo, Hyundai have successfully demonstrated that alternative fuelled vehicles need not pose a risk to car safety.”