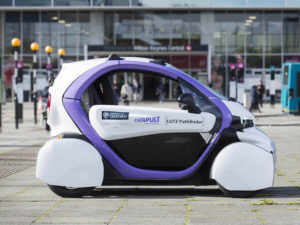 The Transport Systems Catapult (TSC) is testing the vehicles on pavements around Milton Keynes train station and business district as part of the LUTZ Pathfinder project.

Business and Energy Secretary Greg Clark said: “Today’s first public trials of driverless vehicles in our towns is a ground-breaking moment and further evidence that Britain is at the forefront of innovation.