First ever A-Class saloon due for 2019 UK launch

Mercedes-Benz will launch its first ever A-Class Saloon in Europe later this year, said to offer class-leading rear headroom and CO2 emissions from 107g/km. 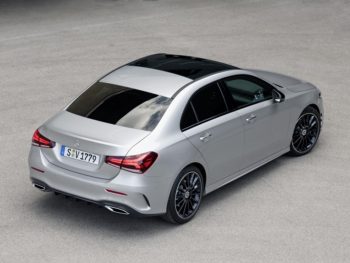 The A-Class Saloon is one of what will soon be eight compact models.

The saloon joins a growing portfolio of small cars, set to grow from the current five models (A-Class, B-Class, CLA, CLA Shooting Brake and GLA) to eight. It follows a record 2017 for its most compact cars, with 620,000 sold globally and 60% of European customers coming from other brands.

Unlike the version sold in China, the European A-Class saloon doesn’t get a 6cm extended wheelbase, and it doesn’t have frameless doors, as used on the CLA. Mercedes-Benz is claiming around a 10% increase in boot capacity versus the hatch, and a large opening to load bulky items inside.

Production for Europe will take place alongside the hatch, in Rastatt, Germany, and engines will also be shared. From launch, these will comprise the 161bhp A 200 petrol, with CO2 emissions from 119g/km, and the 115bhp A 180 d diesel, which returns up to 70.6mpg and emits 107g/km in its most efficient guise.

The first UK cars will arrive in April 2019, and are likely to follow the same SE, Sport and AMG-Line trim structure as the hatchback. Pricing will be announced in due course.