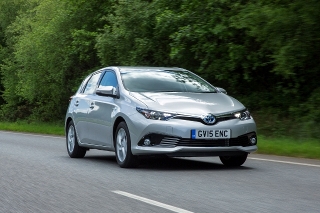 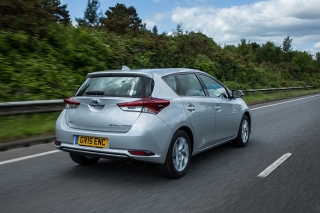 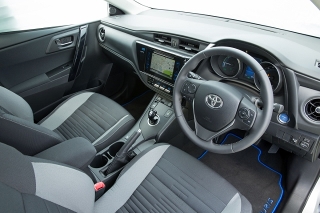 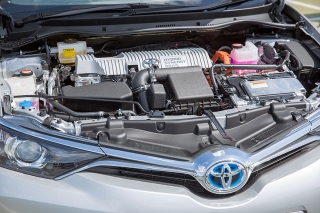 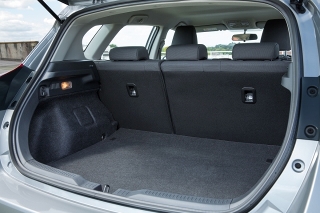 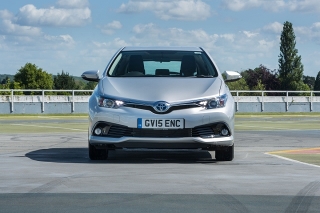 Another day, and yet another hybrid launch. For Toyota the hybrid has become so integral to its model line-up it's giving the new 1.8 VVT-i Hybrid engine top billing in the revised Auris.

With more than half of all outgoing Auris models being sold as hybrids, it’s easy to see why the other two other new engines in the range, a 1.2-litre petrol and a BMW developed 1.6-litre turbodiesel, have second billing. Not that there’s anything wrong with either of these Euro 6 compliant engines. In fact, as driving machines, both deliver a more spirited drive than their electro-petrol sibling. The 1.3 and 1.8-litre petrol engines remain as before, with the 1.4-litre diesel getting an update to improve overall efficiencies. Insurance for all models is now two groups lower.

Back to the hybrid. This is the third generation powertrain and by returning 83.1mpg with 79g/km of CO2 emissions also the most efficient to date, and costs from £19,645. Yet, for all the advancements Toyota have made with this engine over the years, the eCVT gearbox, the only form of transmission available, habitually drags it back to the dark ages.

From the start, the 80bhp electric motor becomes the Auris’s primary source of power, delivering 152lb of immediate torque, which translates to a 0-62mph time of 10.9 seconds. Then add into the equation 98bhp from the petrol engine, and Toyota’s claimed 112mph top speed seems quite achievable. Not that you’d want to go that fast in it. Nor drive it with too much verve.

Two new equipment grades are also being introduced with this Auris – the Business Edition and Design – increasing the total trim levels to five. These will sit towards the top-end of the options list and add cruise control, seven-inch touchscreen infotainment centre and sat nav is only bettered by the all-encompassing Excel trim.

All cars receive LED running lights, rear LED lights and Bluetooth, with 15-inch alloys and a colour TFT multi-information display become standard on the entry-level £19,645 Hybrid Active. Toyota Safety Sense, a £450 upgrade which features a pre-collision system, lane departure warning system and an automatic high beam assist system, is available across the range, except in Active.

A new set of headlights and few tweaks to the exterior bodywork does makes it appear marginally different to the previous model. The interior, however, is a wholly different proposition. High-grade soft-touch plastics and tube-style instrumentation have completely transformed the cabin. It’s now so much more inviting than before, and better laid out too. Total cargo space remains the same; maximum of 1,199-litres in the five-door hatchback and 1,658-litres in the wagon.

While the Auris will never set the motoring world alight, it’s inoffensive, fit for purpose and keenly priced. Tax-busting hybrid and 1.6 D-4D are the fleet picks.

By Alex Grant / 8 years ago / Road Tests / No Comments

Toyota is listening. It’s been gathering opinions about its model range, and is deploying much-needed upgrades across the board, with the Auris the latest to benefit.

So, while there are few visual clues alluding to it, most of the platform and drivetrains are unchanged in the new Auris – running costs and reliability were already on its side. Instead, Toyota has spent time rectifying criticisms related to the aesthetics of the outgoing car. Largely skin deep, but still very important.

So this new car is considerably better looking than the slightly chubby outgoing model. It’s leaner, 55mm lower in height due to a cut-down roofline and more aggressive too, thanks to the new GT86-style bumper treatment, narrower headlights and chiselled rear light clusters.

It’s the same story inside. Gone is the old car’s vast, featureless plastic dashboard and floating centre console. In its place is a design much more in keeping with the new Yaris, with a large flat pad across the middle optionally trimmed in real leather.

This is a vast improvement. It’s far more tactile and much better laid out, now using Toyota’s simpler new Touch and Go navigation system instead of the unintuitive unit in the outgoing car. Matching fonts and illumination for all the switchgear help to bring the car closer to segment benchmarks.

Front seat occupants now sit slightly lower, and rear seat passengers will find there’s no significant loss of space despite the shallower roofline. Boot space is marginally larger than in the outgoing car, but it’s hybrid owners who benefit most. The battery is now relocated under the rear bench, offering more boot space and allowing for the segment’s first hybrid estate next summer.

The new Auris also rides 10mm lower than its predecessor, which Toyota says reduces body roll enough to use softer springs, while the underside features new aerodynamic blades which channel air cleanly along the underside. Both reduce drag, which has been a key part of improving the efficiency of its engine line-up.

These are identical to the outgoing car, comprising 1.3 and 1.6-litre petrols, a 1.4-litre diesel and a petrol-electric hybrid, each with efficiency improvements. For the first time, Toyota is predicting European sales to be split equally between all three types.

The hybrid – which will account for 60% of UK fleet sales – has had only a small increase in efficiency. This now returns 74.3mpg and emits 87g/km CO2, still with the tendency to rev the engine hard under load due to the CVT gearbox. However, with the interior improvements, this no longer feels a class below the slicker Prius.

But there’s now a good reason to consider the diesel. In line with efficient diesels from rivals, this now emits 99g/km CO2 rather than 128g/km, while returning 72.4mpg. It’s the least powerful 99g/km C-segment car on sale, though, at just 90bhp against the 105-115bhp available in rivals. Unfortunately it wasn’t available to test at the press launch.

Improvements to the petrol engines are less pronounced. The bigger-selling 1.6 emits 138g/km CO2 and has to be worked hard. Power delivery is smooth and quiet, but it feels a generation behind the downsized, turbocharged petrols used elsewhere.

From an entirely aesthetic point of view, the Auris is a massive leap forward over the old car with additional rational benefits from its improved efficiency. It faces stiff competition in the form of the latest C-segment cars, though the new 90bhp diesel engine will add to its fleet credentials.

Strong competition from Korea at one end, and increasingly affordable premium brands at the other mean the Auris is in a squeezed market. This is a well-executed update and Auris will have plenty of sharp-driving rivals, but whole-life cost may be the deciding factor.