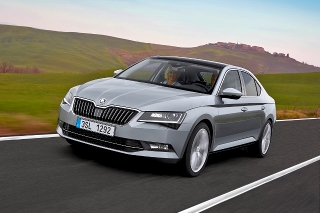 There’s always been an unfiltered honesty about the Skoda Superb. And because it’s never strayed too far away from its core values – a well-built, value-for-money, executive car with a humungous interior – it has won itself a legion of faithful followers.

However, there has been a bit trade-off for this integrity, and that’s its exterior design. It’s always appeared a little too clunky.  But it was never so ungainly that it didn’t sell. Since it was first introduced in 2002, Skoda has sold over 42,000 units; 2014 being the best year on record, with 5,955 sales. And that’s in a run-out year; where it’s known there’s a new model on its way.

And here it is, the third generation Superb, which goes on sale in September. The first thing you notice about this latest version is not that it’s grown by 28mm, or there’s been a significant increase in standard equipment and technology. No, the most impressive thing about this Superb is that it’s looks so good. Inspiration comes from the VisionC concept show car, and it demonstrates the direction the brand is taking.

It is wider than the old cars, by 47mm, so there is more shoulder-room up front, and rear passenger legroom benefits from the longer wheelbase. Boot space is enormous and by far the largest in its class – 625 litres with the rear seat raised, 1,760 litres with them folded down. That’s 30 litres larger than before.

A five-inch touchscreen is standard on the entry-level S trim, while the SE, SE Business, SE L Business and Laurin & Klement versions receive screens up to 8.5 inches wide. Graphics on the larger screens were razor sharp, and the swipe function works well, but SmartLink – a standard feature from the SE-trim upwards that allows you to mirror your smartphone’s apps on the dash screen – wasn’t so good. It suffered sluggish responses, and the navigation confused itself more than once.

The SE Business is aimed squarely at the corporate user. It builds on the equipment levels of the S and SE trims, and includes 17-inch alloys, Alcantara upholstery, dual zone air conditioning and LED rear lights. Despite all the additional kit, it actually costs no more than the SE.

This diesel is a bit on the lethargic side, especially when pulling away; and only really feels comfortable when it’s on the motorway. And that’s much the same story for the other diesel in range, the 2.0-litre TDI. It comes with a choice of outputs – 148bhp or 188bhp – and even though its printed performance times are respectable enough; top speeds of up to 147mph and 0-62mph times as quick as 7.6 seconds, not once did it display any sense of urgency.

The lesser-powered 2.0-litre TDI is expected to account for the majority of fleet sales, yet the real jewel in the range is the 148bhp 1.4-litre TSI petrol. It’s a lively and responsive unit, more so than any of the diesels, and because it has a decent amount of low-down shove, it doesn’t need to be pushed too hard.  It also features a cylinder on demand system, which helps deliver fuel efficiencies of around 57.7mpg and 115g/km of CO2 emissions. With a starting price of £18,640 – which is £50 less than the outgoing S model – it becomes the least expensive and a worthy consideration if it’s not going to cover a huge annual mileage.

With its sleek styling, vast and generously equipped cabin and low running costs, the Superb trounces all the competition. The flagship L&K version raises the bar even higher, but it has a £30k price tag to match.