By Jonathan Musk / 4 years ago / Road Tests / No Comments 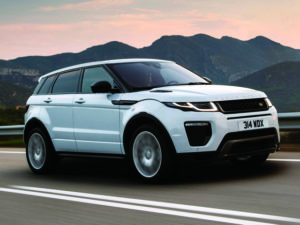 With more than 600,000 units sold, the Evoque has been the dominant sector leader since its introduction in 2011. However, at nearly seven years old, the car is beginning to show its age.

To bring the car up-to-date, Land Rover is transitioning from Ford-sourced engines to new units designed and built in-house at its £1bn Engine Manufacturing Centre in Wolverhampton. For the first time, new petrol Ingenium engines are being introduced into Evoque and Discovery Sport, joining the Ingenium diesel SD4 that’s been around for a couple of years.

The new Ingenium units are designed to bring the car back into contention with improved power, refinement, economy and emissions. These attributes apply to both new petrol Si4 237bhp and 283bhp units and the SD4 237bhp diesel. The latter produces an impressive 369lb/ft torque, yet emits just 153g/km CO2 from its twin-turbocharged, two-litre powerplant. Pickup and response are noticeably improved, while at cruising speeds the car feels more at ease with plenty of power always in reserve.

The SD4 doesn’t quite match the slick performance of the petrol Si4 units, despite having the edge on torque, but it is arguably the pick of the bunch for those wishing to opt for the most potent diesel variant. However, that power comes at an eye-watering price differential of almost £18,000 above the entry-level 148bhp eD4, although it does benefit from HSE Dynamic trim that includes a 10.2 inch touchscreen and other niceties included as standard.

Naturally, Land Rover was keen to show off the Evoque’s off-road ability and this remains impressive considering its soft-road appearance. Nevertheless, this ability comes at the expense of on-road manners and the Evoque struggles to hide its height and weight compared to lithely and less-able off-road rivals.