On first appearance, the revolution of the tenth generation of E-Class may seem a little on the tame side. The E-Class is hugely important for the Stuttgart brand – 13 million units sold to date – so it was unlikely to take it too far left of centre, but Mercedes is sending out a message; it wants this car to set the benchmark that all executive saloons should aim for. The undisputed class-leader.

The main headline-grabber will undoubtedly be the E-Class’s semi-autonomous driving capability; closely followed by the changes applied to the interior, mechanics, and abundance of safety features.

Its super slippery silhouette, which cuts through the air with less friction than a Tesla Model S, may not warrant quite as many column inches, yet nonetheless, it’s still worthy of mention. Cynics may suggest the architecture of this new E-Class seems to mirror that of its bigger brother, the S-Class. Crease lines run along either side of the bodywork, fluidly connecting bonnet, grille, new LED active headlights with its tapered rear end and the short overhangs. Look really carefully and it’s actually quite sexy around the edges.

It’s longer too, by 65mm, which gives more room to backseat passengers and allows 540 litres of boot capacity. The cabin really is the E-Class’s piece de resistance. Set in skilfully worked leather, metal and wood, the flowing dash, four centre air vents and changeable ambient mood lighting are a blatant copy of the S-Class interior layout. It really is quite beautiful, both in design and build execution.

Two trim levels will be available from launch, with SE cars starting at £35,959. The sportier AMG Line costs £2,495 more. Equipped to the gunnels, both models offer parking sensors, a reversing camera, leather seats and a self-parking system, as well as sat nav and LED headlamps.

Just the one model will be available when it arrives in May, the E220d. Traditionally, this is by far the most popular in the UK. A new all-aluminium 2.0-litre, four cylinder diesel engine which replaces the old cast-iron-block, 2.1-litre diesel (which, despite being fairly economical lacked any real refinements).

Mercedes is making a big noise about how this car is the closest thing on the market to being a fully-autonomous self-driving car. True, once you’ve handed over control it will adjust the speed according to traffic conditions, even steer itself around a corner. Ask it to overtake the car in front, and it’ll do that too. Nevertheless, you are reliant on computer wizardry to all make this happen safely, which takes a massive leap of faith to trust it will be a better pilot than you.

Switch off the autopilot, take back control, and this new E-Class will handle just as accurately under human guidance. In the ride department, it’s more than a match for most of its rivals; only the BMW 5 Series does it better around corners, but only just. Opt for the £1,495 air suspension (fitted to our test cars), and you’d be hard pressed to find any car, even those costing twice as much money, which would eat-up long-distance miles so effortlessly.

By taking the best bits of their brand – styling, safety, comfort, fuel-efficiencies, refinement and ride – Mercedes has ensured no other car currently on the market can surpass the new E-Class. 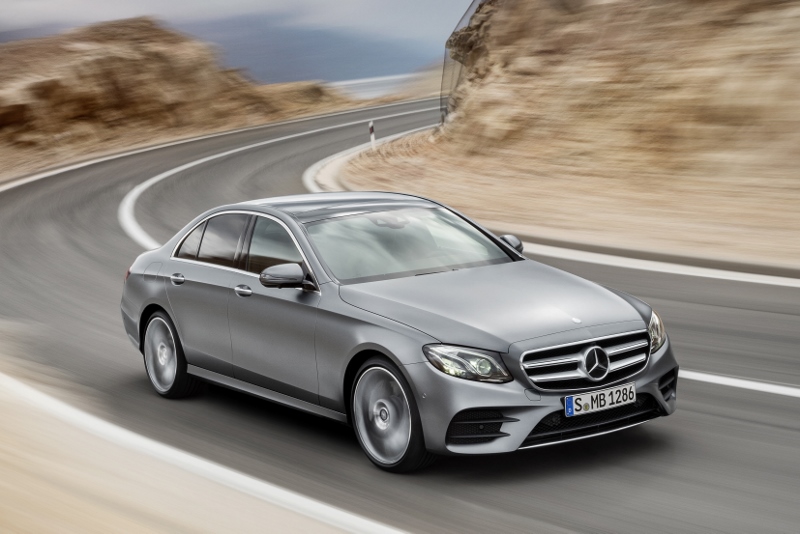 By Steve Moody / 8 years ago / Road Tests / No Comments

When Mercedes-Benz launched the E-Class on which this updated version was based, they made quite a play of its conservative styling, which harked back to an age when its cars were the epitome of over-engineered, reliable, quality motoring.

The sentiment was spot on, in trying to re-establish the brand as the cornerstone of the premium sector. But, although it has been a relatively successful car for Mercedes-Benz (and which E-Class isn’t?) it has rather paled in comparison to sexier, more stylish efforts from BMW and Audi.

So this facelift, which is the biggest retooling the firm has ever done on a car above and below the metal, is designed to bring the E-Class up from steady performer to desirable business express.On the outside, the front has been completely revised with new single headlamps and some organic-looking daytime running lights, which replace the previous twin headlight design. Big lower air vents add some sportier appeal too. At the rear, the lights and bumper have been revised, the latter featuring a distinctive lip and a black insert with chrome trim.

In between, the conventional square proportions of the cabin have been retained and whether the design works as a whole will be in the eye of the beholder.

In the cabin, some improvements have been made, with better materials, more integrated trim and a redesigned centre console, and the whole effect is more luxurious than the fairly workmanlike cabin of the previous car.

Of more importance for fleets though are the changes that have gone on elsewhere, where the E-Class gets safety systems from the Starship Enterprise and significant improvements in emissions.All cars are now fitted with Collision Prevention Assist, which uses cameras and radar linked to the steering and braking systems, which using the brakes will actively steer the car away from oncoming traffic if impact is likely, while it can also slam the brakes on and bring the car to a halt in front of pedestrians.

In terms of engines, the E 220 CDI is now the only engine with manual transmission in the new E-Class range, and the new four-cylinder petrol engines, as well as the E 350 BlueTEC engine, are all Euro6 compliant. There are also significant CO2 improvements across the range, with reductions of up to 20g/km in emissions. The E 300 BlueTEC Hybrid’s CO2 figure remains at 109g/km, but is now achieved with 17” wheels (previously 16”).

The range has now been brought into line with models such as the A-Class, with the AMG Sport model offering the same engines as the SE, with the addition of the 350 BlueTEC but is priced at £2,495 above the SE, starting from £34,895 OTR.With more than £4,000 of additional standard equipment in the new SE model for a £2,280 increase over the previous SE, and almost £3,000 of added standard features in the new AMG Sport for £575 over the previous Sport, Mercedes-Benz reckons it has a car that competes very strongly in the sector.

Better to look at with more equipment and lower emissions: the heartland business car for Mercedes-Benz is now a more complete package than ever, and better value too. It also answers the question of how to compete with its main rivals in the areas of look, feel and styling.