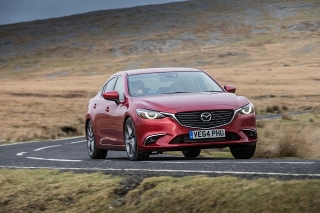 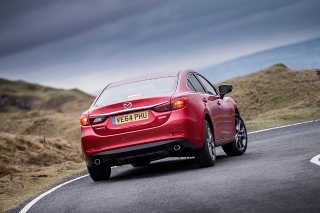 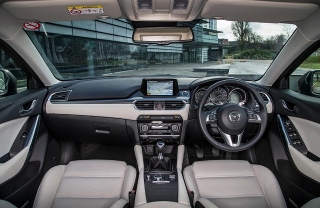 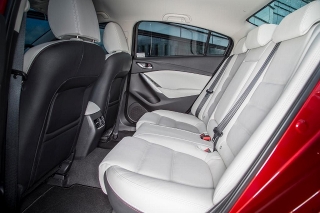 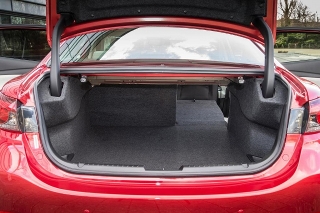 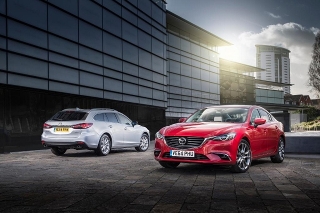 While new segments and premium brands might be stealing sales away from the traditional upper-medium saloons and estates, there are some genuinely brilliant options for those who don’t see the need for a high-riding lifestyle vehicle or flashy badge. The Mazda6 is up at the top of that list.

It’s been an important part of the brand’s surging sales since it launched early in 2013. The carmaker sold 37,784 cars in the UK last year, a 21% increase, and with the Mazda2, Juke-rivalling CX-3 crossover, a new MX-5 and refreshed CX-5 and Mazda6 all launching during 2015, it’ll be surprising if its results aren’t equally positive next January.

For the most part, the Mazda6 line-up is unchanged. There’s still a choice of SE and SE-L versions, each with the option to move into a navigation-equipped trim level for an extra £700, and the range is topped out by the striking Sport Nav. Unusually it manages to look sporty and elegant regardless of bodstyle or trim level, so there’s been no need to perform radical changes.

Instead, the majority of updates are found inside the car. All versions now feature a tablet-style seven-inch touchscreen on top of a redesigned centre stack, now using the web-enabled MZD Connect infotainment system instead of the clunky TomTom unit used to date.

Leather upholstery, if the option is ticked, is matched to a horizontal strip across the dashboard, and the centre console looks much neater with its electronic handbrake. That latter point is divisive, but the cabin feels convincingly more upmarket than it did before.

Sport Nav versions get the biggest upgrades, which Mazda reckons could help bolster sales of its flagship trim level. With new 19-inch wheels, a thicker grille flanked by LED headlights and a six-way adjustable driver’s seat in its leather-trimmed interior, it wouldn’t feel like a downgrade from any premium-brand rivals.

Neither would the driving experience. Mazda’s SKYACTIV Technology package, comprising weight reduction, chassis refinement and new four-cylinder engines, made this one of the segment’s best driver’s cars; susprisingly agile and with perfectly weighted steering, a sporty driving position and short-throw gear changes. None of which comes at the expense of comfort, short of the firmer ride quality on the Sport Nav’s bigger wheels.

But engines are still at the large and powerful end of the segment. Mazda’s 2.2-litre diesel offers strong, linear power delivery and competitive on-paper figures for both the 150bhp and 175bhp outputs, but there’s no 1.5-litre diesel to bring CO2 emissions under 100g/km. The upside is, they’re genuinely fuel efficient in real-world use and, with the additional sound deadening fitted for 2015, they’re also incredibly quiet.

So while this segment’s sales are being challenged by premium brand products, crossovers and MPVs, the Mazda6 is a reminder that there are still plenty of reasons to stick with the traditional D-segment saloon or estate. Ironically, it might just be becoming an avant-garde choice.

Striking good looks, an engaging drive and competitive running costs continue to put the Mazda6 in a good position for those who aren’t chasing sub-100g/km CO2 emissions.

By Alex Grant / 8 years ago / Road Tests / No Comments

For a relatively small manufacturer, Mazda’s disproportionately large back-catalogue of innovation is impressive and, if anything, rather under-marketed. But there’s a real buzz in Yokohama at the moment, and it seems Mazda is about to edge in on some of the limelight it’s always deserved.

The buzz in question is SKYACTIV Technology, a comprehensive package of engine, transmission, chassis and body upgrades which will make all of its future models lighter, safer, more economical and better to drive. Put simply, Mazda has set out to find the Holy Grail – enjoyable efficiency, without (for now) resorting to hybrid or electric technology.

SKYACTIV Technology debuted in the CX-5 crossover, and has helped contribute to sales which are exceeding expectations worldwide. Mazda6 is next in line, and this all-new model arrives in the UK at the start of next year as a well-rounded saloon and estate range that’s going to be very hard to ignore.

Looks are very much on its side, which is a good start. The previous generation wasn’t an ugly car, but if anything, it was slightly too understated against the tried and tested mainstream. Mazda has delivered on the promise of the Takeri concept, and the new Mazda6 leaps to the top of the class on style. Whether it’s an estate or a saloon, there’s no bad angle for its sporty, muscular bodywork.

There’s also been a real effort to make commonly-touched parts of the dashboard and door cards softer and nicer to the fingertips. The seats are supportive, especially the semi-bucket versions in the Sport, and the controls are logically laid out and positive to use. This is an easy car to get familiar with, and comfortable and solid too.

The range comprises three trim levels, each with a Nav version which adds the latest version of TomTom’s familiar, accurate and regularly updated satellite navigation built into the infotainment system. Audio controls are operated via the steering wheel or a rotary commander next to the mechanical handbrake – the latter being a rapidly disappearing feature in modern cars.

Rational appeal hasn’t been neglected. Mazda6 features the same 2.0-litre petrol and both 2.2-litre diesel engines offered in the CX-5, each with a choice of super-fast and very smooth automatic or short-shift manual gearboxes. There’s a marked difference in straight line urgency between the 173bhp and 148bhp diesels, but while the 108g/km lower-powered version is the real cost-cutter it’s no longer a punishment to size up. Even in its most powerful form, and with the handicap of an automatic gearbox, the Mazda6 saloon returns an entirely palatable 58.9mpg with 127g/km CO2 emissions.

Driver involvement has been woven into the car’s fabric. It’s as sure-footed as its predecessor, but there’s been a tangible effort to make driver inputs translate mechanically, naturally into entirely predictable responses from the car that adds up to a really enjoyable drive. Details such as the layout of the automatic gearbox and the two different engine notes for aggressive or relaxed driving are signs that Mazda really cares for the experience of being behind the wheel.

Finding faults comes down to nit-picking. Nothing here is poorly made but small parts of the cabin don’t feel as upmarket as, say, a Passat. There’s also a substantial penalty in ride quality for drivers opting up to the Sport with its 19-inch wheels, which large-wheeled rivals such as a Mondeo doesn’t suffer from. Ultimately, though, Mazda has a real opportunity to steal sales from the rest of the D-segment with its new flagship. And so it should.

Mazda has worked hard to edge itself to the top of the class on efficiency without losing the driver appeal of its flagship, and it shows in almost every detail. With the equally striking new Mondeo delayed, the Mazda6 leaves the rest of the upper medium sector looking rather outdated.

Previous: Mercedes-Benz: we will become number one in premium fleet sector
Next: Volkswagen taking orders on next generation Golf