By Dan Gilkes / 6 years ago / Road Tests / No Comments 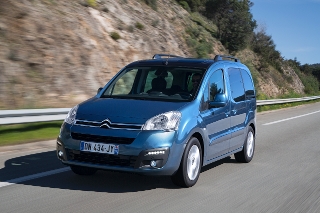 Those looking for a practical people carrier that can take the knocks of occasional load-lugging duties, or a family car for the active outdoors type, may be attracted by the latest version of Citroën’s Berlingo Multispace. With new engines, upgraded technology and a modern front-end redesign, Multispace gives Citroën’s own C4 Picasso a run for its money.

A revised front bumper, with LED daytime lights and a new radiator grille brings a modern look to the car, which is now offered with two additional colours, Cumulus Grey and Moka Grey. There are also new upholstery designs inside, though the car retains its three individual row two seats.

The big news is the arrival of a seven-inch touchscreen that brings together media and navigation functions along with PSA’s Mirror Screen technology. This allows drivers to duplicate their smartphone content on the screen, which also doubles as a monitor for the optional reversing camera. Also new to Multispace is Active City Brake, which will be available from November 2015 production.

Citroën will offer a 1.6-litre VTi 95 petrol engine, but the Euro 6 diesels are expected to account for the majority of sales. The BlueHDi 1.6-litre engine is available with 75hp, 100hp and 120hp, with both 100hp and 120hp engines offered with Start/Stop technology.

The BlueHDi 100 Start/Stop manual is the sweetspot of the range, delivering 68.0mpg and just 109g/km of CO2. That said, the BlueHDi 120 delivers a serious boost in power plus 300Nm of torque, yet boasts 64.2mpg and 115g/km thanks in part to its new six-speed manual gearbox, a first for Berlingo. All diesel Multispace models have a 17-litre AdBlue tank, that should last up to 12,400 miles between refills.

Previous: Search is on for ‘most efficient fleet driver’ at 2015 MPG Marathon
Next: Government approves BVRLA’s Conciliation Service