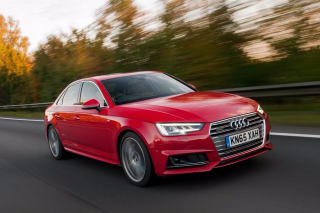 Even using the outgoing model as a visual aid, it wouldn’t be difficult to persuade your average member of the public that the new Audi A4 is simply a heavy facelift rather than an all-new car.

There’s nothing wrong with that. Despite being the oldest model in its segment by almost five years, the outgoing car was still competitive on CO2, keenly priced and looked modern. But, on a lighter new platform and with an injection of Audi’s new technology, the new A4 amplifies its predecessor’s best bits while addressing its weaker points.

Most of the latter, it would seem, were inside. Modern Audis were showing the age of the outgoing A4’s cabin. Its replacement is impeccable with its satin silver highlights, soft-touch materials, frameless mirror and £450 all-digital instrument cluster. It’s noticeably more spacious in the back too.

It’s not flawless, though. The left-hand drive cars on the launch had slightly offset pedals, and there’s still a large bulge in the transmission tunnel, intruding into what will be the driver’s side footwell on UK models. A lingering problem which also affected the outgoing A4.

But the driving experience itself is much improved. It isn’t quite as driver-focused as a 3 Series, but there’s a reassuring weight to the controls and new-found agility and confidence from its lighter body. Ride quality is a revelation on small wheels, but also impressive on the sizes British buyers tend to opt onto. The brand’s most streamlined bodyshell to date means wind noise is almost dialled out, with the flip side that it shows up the tyre roar instead.

There are now three engines under Audi’s low-carbon Ultra banner: two diesel engines and, shock horror, a petrol. It should come as no surprise that the latest-generation of the Volkswagen Group’s 2.0-litre diesel will account for the bulk of corporate orders, in turn weighted towards the lower-powered 148bhp unit. With British drivers slightly more concerned about style than comfort or outright CO2 performance, the smallest wheels won’t be offered here – the result is a lead-in emissions figure of 99g/km rather than the 95g/km in other markets.

It was the 320d-rivalling 188bhp diesel which was available to test, equipped with a manual gearbox, Sport styling and on-the-money CO2 emissions of 102g/km. Performance is brisk and refinement impressive, let down only by an under-damped drivetrain vibration through the gearstick, though it’s an engine which feels tuned to yawns of overtaking muscle, rather than outright performance. Both diesel Ultras get a 40-litre fuel tank, with the usual 54-litre tank as a no-cost option.

There’s been a trickle-down of economy improvements across the range. Even the V6 diesel emits only 109g/km, and there are some compelling reasons to consider a petrol engine. Notably the 2.0 TFSI Ultra which, as well as being vibration-free and almost silent unless revved towards its slightly tinny-sounding power band, offers CO2 emissions from 116g/km plus a pleasingly spread of torque and less turbo lag than the diesel, despite producing the same 188bhp. Like for like, it’s also £2,350 cheaper.

The A4 can also use other on-board systems to improve real-world economy. S tronic dual-clutch transmissions can ‘freewheel’ at low loads to save fuel, which also works with cruise control switched on. The drivetrain can even use navigation data to pre-plan freewheeling opportunities and gearshifts based on corners and topography ahead, or make suggestions to the driver.

All of which is change where it counts. The A4 might look evolutionary in terms of styling, but the technology underneath is anything but.

The new A4 is a revolution disguised as an evolution. Home to one of the best cabins in its class, and able to satisfy as a driver’s car as well as on the details and technology Audi is known for, choosing a compact executive car has never been more difficult.