One in five (19%) UK firms say their employees have been involved in an accident while driving for work due to using a handheld phone at the wheel. 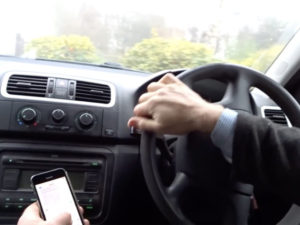 Carried out a year after increased penalties were introduced for using handheld phones at the wheel on 1 March 2017, the survey of 1,000 UK businesses by RAC Business found 15% of businesses admit their drivers are ‘often involved’ in accidents while using a handheld phone. And 5% even said it happened ‘on a regular basis’.

RAC Business said one of the contributing factors could be that four in 10 (38%) businesses said they expect commercial drivers to answer calls while on the road. For larger businesses (500 to 1000 employees) that figure rises to 49%.

However, almost a third (30%) of businesses of all sizes don’t provide legally compliant hands-free kits and 20% have no policy for mobile phone use while driving.

The results of the survey have prompted calls from RAC Business for fleets and business owners to highlight the dangers of using a handheld phone at the wheel to their employees and to make sure they have a policy in place for the use of phones while driving for work.

Rod Dennis, from the RAC’s Be Phone Smart campaign, which was launched to encourage motorists to pledge not to use their handheld phone or smart device at the wheel, said the law is clear on the issue.

He said: “If employers expect their company drivers and staff to take calls on the road, which 38% admit they do according to our research, then they should be providing legally compliant hands-free kits so they can do that without breaking the law.

“Our survey says 70% of employers do provide hands-free kits, but in our view that still needs to be much higher, and every business should have a clear code of conduct or policy for drivers.

“However just because it’s legal to use a hands-free kit, it doesn’t necessarily means it’s always safe to do so, and it certainly shouldn’t be used to have long conference calls or to proactively make lots of calls on a long journey.

“It should always be down to the driver in terms of how they feel about taking a call and they should only do so if they judge it to be safe and not causing them a distraction.

“In the same survey we asked businesses whether it was important to uphold their ‘duty of care’ towards their company drivers and 92% agreed it was.

“Therefore businesses need to have a policy in place which is not only clear in the expectations of their drivers, but also needs to have a high profile in the business to ensure the message is getting through.”