A huge fall in the number of drivers fined for using handheld mobile phones is the result of dramatically reduced police numbers, not improved driver behaviour. 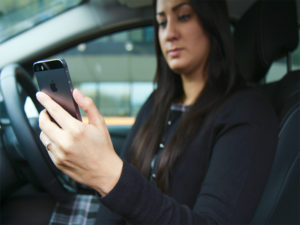 In response the RAC said the figures “lay bare the scale of the handheld mobile phone epidemic that has been allowed to sweep across the country largely unchallenged”.

Road safety spokesman Pete Williams commented: “The simple truth is the problem of illegal handheld phone use at the wheel is undeniably getting worse, with fewer and fewer people being caught. “RAC research released in September showed that the number of motorists that think it is acceptable to make a quick call doubled from 7% in 2014 to 14% in 2016 , while a fifth (20%) now believe it is safe to check social media on their phone while stopped in traffic. Attitudes are clearly relaxing as a result of drivers no longer fearing punishment.”

Last month saw the Government announce that it is doubling the points and fines for drivers using mobile phones behind the wheel.

Williams added: “We fear this alone will not be enough to bring about a change in the attitude of those motorists who continue to believe it is acceptable to use a handheld phone while driving. “Law-abiding motorists who regularly see others using a handheld phone at the wheel, putting lives at risk, want to know that the law is being enforced. With a 27% decline in full-time roads policing officers since 2010 and little chance of an increase in numbers in the near future, we need to see all police forces giving greater priority to the enforcement of this offence.”

Previous: Risk of car theft rises 25% in winter
Next: Pilot course to educate drink drivers on dangers of drug driving