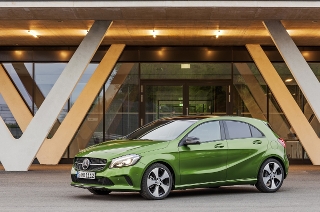 Updated styling sees the introduction of a new, more arrow-shaped front bumper based on the Concept A-Class seen in 2011. The A-Class also gains a diamond grille, new LED High Performance headlamps as an optional extra and newly designed rear lights with exhaust tailpipes integrated into the bumper.

Design changes to the interior include a new instrument cluster and head unit, which is now available with a larger 8-inch screen that also comes as standard on Sport and AMG Line. New colours and materials, as well as new finishes for the trim in the dashboard are also available.

Updates also include an expanded engine range, with a new efficiency champion in the form of the 108bhp A 180 d SE, which offers an official combined fuel consumption of 80.7mpg with CO2 emissions of 89g/km. Also new are the manual transmission versions of the A250 AMG.

And the range-topping A45 AMG model receives extra power to take it up to 376bhp.

Mercedes-Benz is also using the A-Class model facelift as the opportunity to introduce the new naming system. This sees petrol versions switch to just a number to show which model they are whilst diesels replace the previous ‘CDI’ with a single ‘d’ – the A200 CDI is now called the A200d, for example.

Other changes see the introduction of the Dynamic Select suspension, which at the touch of a button, modifies the engine, transmission, suspension, steering and air conditioning to a choice of four driving modes ‘Comfort’, ‘Sport’, ‘Eco’ and ‘Individual’. The system is optional but included as standard on the Sport model line upwards as well as with all models with the 7G-DCT gearbox.

The line-up also sees the introduction of the special ‘Motorsport Edition’ model, which features petrol green detailing on the front and rear bumper trim and on the AMG light-alloy wheels. It also comes with bespoke sport seats and is available on the A220d / A220d 4MATIC upwards, except the A45.

The new-generation A-Class can be ordered from 3 July 2015. The first models will be in dealer showrooms at the end of September.