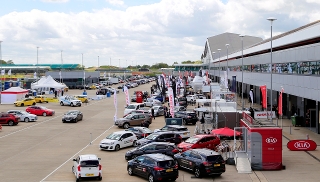 The plaudits have poured in from vehicle manufacturers and fleet service companies alike following this year’s action-packed event at Silverstone’s world-famous Grand Prix circuit, which was sponsored by Barclaycard Fuel+ in association with TMC.

With next year’s event now confirmed for Wednesday, May 11, many exhibitors have already moved to re-book for next year on the back of this year’s success.

One of those was Selsia Vehicle Accident Centres, and marketing director Neil Marcus said: “This was our second year at the Fleet Show at Silverstone and we’ve already booked our space for 2016.

“The quality of the venue, the organisation and our stand location are always excellent. Moreover, we get to meet some great people from the fleet sector with whom we develop long lasting business relationships.”

There were a number of newcomers to the Show, amongst them leasing and fleet management provider, Ogilvie Fleet.

Richard Jessop, head of salary sacrifice at the company said: “It was great to have representatives from the entire fleet industry under one roof and to have so many decision-makers there as well. We’ll definitely be back next year,” he said.

Another exhibitor planning to return next year was Accident Advice Helpline Direct, and marketing manager, Anthony Andres, said: “After preparing for weeks for the launch of FleetConnexions, we were overwhelmed at the positive response from all our visitors.

“With both new business relationships and existing, it was a great day with something for all in the industry. We definitely look forward to next year’s show.”

“Fleet Show 2015 was our first fleet event we’ve attended as an exhibitor,” he said. “From the initial booking to the pre-event communication and the show itself, Fleet World were very helpful and made the whole process run smoothly.

“The location at Silverstone was fantastic and the quality of delegates was equally as good. We look forward to exhibiting at the show again next year. Thank you to the team at Fleet World!”

First timers, Prestige Fleet Servicing, also rated the event very highly. Commercial director, Joe Bhamra, said: “This was our first time at Silverstone, and the event provided us with a great opportunity to display and discuss our products and services to key fleet decision-makers. Well done to the organisers, everything was very professionally organised.”

One of those was Martin Wilson, fleet director at Hyundai Motor UK, who commented: “Without doubt this was the most successful show to date with increased number of guests enjoying the Silverstone experience.”

Electric vehicles were very much part of this year’s Show with a number available for test driving, and supporting them were many of the industry’s infrastructure providers.

One of these was charging solutions provider, Chargemaster, and James Jean-Louis, group commercial director, said: “We were delighted to be part of the Fleet Show again this year and due to the rapid growth in plug-in electric vehicles being added to fleets over the past twelve months, we feel it is an important event to showcase our range of charging systems.”

For others, doing their homework before the event certainly paid dividends. Paul Chater, sales director at IFC Fleet Services Group, said: “We carried out some research by visiting last year’s Show and carefully selected the site for our stand as a result.

“We were delighted with the attendance at the event and saw a number of existing customers, plus some that we’d like to become clients over time. In all senses, we thought it was an outstanding event.”

The event’s organizers were delighted with the feedback from this year’s exhibitors.

Fleet Show director and Fleet World publisher Jerry Ramsdale said: “It is great to hear these accolades for an event that has now become firmly established as a key part of the fleet calendar.

“We have already re-booked Silverstone for May 11th next year when our challenge will be to make Fleet Show 2016 even bigger and better than this year’s record-breaking event. We are looking forward to that challenge and already have plans in place to help take the Fleet show to the next level,” he said.