By Natalie Middleton / 3 months ago / Latest News, Today in Fleet / No Comments

A new electric driverless delivery vehicle said to remove up to 90% of the cost associated with the last mile of delivery has been unveiled this week. 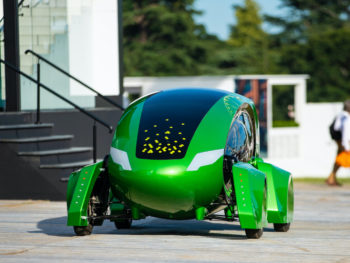 Revealed at the Connected and Autonomous Vehicles Scotland showcase, the Kar-go solution is the brainchild of the UK-based start-up Academy of Robotics and uses AI to deliver small parcels autonomously, in conjunction with an app.

The system is described as being similar to a private hire company service. Recipients can call up their package to be delivered to their location when convenient and can then track Kar-go’s progress – 24/7. Parcels are stored in separate compartments, unlocked via customers’ mobile phones.

Unlike many autonomous vehicles, Kar-go can drive on unmarked roads, enabling its use in rural and suburban areas as well as urban environments, at speeds up to 60mph.

It’s also said to reduce the last-mile delivery cost by up to 90% thanks to a running cost of 1.2p per mile.

An initial working model has been developed, with a latest investment round being run to raise funds to scale-up production and testing.

Academy of Robotics is also working with Eurovia UK, which provides highways maintenance services to UK local authorities, to trial the use of Kar-go to support urban and rural highway management and to accelerate the vehicle’s “training” to navigate on unmarked roads in the UK.

“Britain has a rich heritage in automotive design and a promising future in AI,” said Academy of Robotics founder William Sachiti.

“In creating Kar-go, we wanted to take advantage of this drawing on the strength of British motoring heritage and design talent and combining this with the latest AI technology to produce a vehicle which will deliver goods safely, sustainably and in style.”

Previous: Comment: Car sharing and fleets in London – The way to become carbon-neutral by 2050?
Next: Electric cars cooler than ICE, say drivers