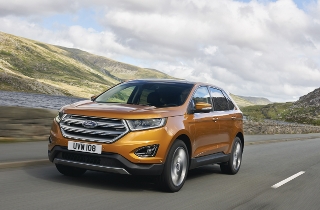 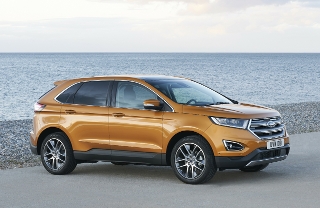 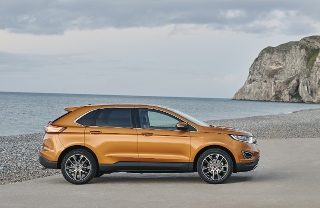 The Edge also will feature Ford’s Intelligent All-Wheel Drive (AWD) technology as standard as well a new Ford technologies, including Adaptive Steering, which automatically optimises the steering response according to vehicle speed, making it easy to manoeuvre at low speeds, while remaining precise and intuitive at higher speeds; and Front Split View Camera, which makes restricted visibility junctions or parking spaces easier to negotiate.

Said to be a segment-first, Pre-Collision Assist with Pedestrian Detection will also be introduced on the edge and offers a camera and radar-based system that operates at speeds from 5mph to over 100mph to detect vehicles and people in the road ahead. The system can automatically apply the brakes if a potential collision is detected and the driver does not respond to warnings. Ford added that it anticipates a five-star safety rating from independent crash test authority Euro NCAP.

The Edge interior brings soft-touch trims on the dashboard and centre console, high-gloss piano black surrounds on the switch bezels and a satin silver metal finish for the door handles, air vent bezels, glovebox trim and steering wheel detailing. The model is offered with heated and cooled front seats and heated rear seats.

The new Edge – which was unveiled at Geneva earlier this year – will play a key role in the brand’s plans to target sales of 200,000 SUVs in Europe by 2016 – a 200% increase compared with 2013. In all, five new or redesigned Ford SUVs and crossovers will launch in Europe over the next three years.

In addition, Ford is looking to significantly increase its offering of all-wheel drive (AWD) technologies and by early next year, will offer all-wheel drive and four-wheel drive on eight models – 50% of its line-up – compared with three models in 2012.

“Globally, Ford has been at the forefront of SUVs for decades, and is now delivering a European line-up that offers the stylish design, car‑like dynamics and fuel efficiency that are key to why SUVs have become so popular in Europe,” said Jim Farley, chairman and CEO of Ford of Europe. “As demand for SUVs continues to grow, so will the range that Ford offers – from rugged models with true go-anywhere ability to sporty models designed to suit urban lifestyles.”

Frankfurt will also see updated versions of the Kuga and EcoSport on display. Set for launch later this year, the revised Kuga brings new colours and Ford’s SYNC 2 connectivity technology with an 8-inch colour touchscreen. The updated EcoSport compact SUV also includes offering a version without the spare wheel on the rear tailgate along with improved interior refinement, better performance and sharper driving dynamics.

Previous: Fleet & lease average values remain at near record levels in August, reports BCA
Next: Latest recruits at First Vehicle Leasing bring wealth of experience from across the pond