EU urged to push ahead with future safety standards

EU policymakers and national governments are being urged to lend their support to future vehicle safety measures proposed by the European Commission. 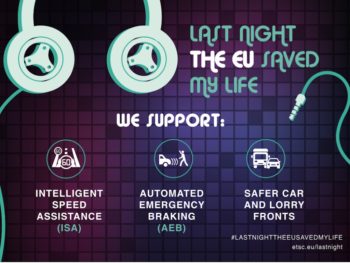 Published in May, the transport policy proposals – known as the Third Mobility Package – would see 11 different systems, including advanced safety features such as autonomous emergency braking (AEB) and intelligent speed assistance (ISA), alcohol interlock installation facilitation, drowsiness and attention detection and accident data recorders, be required on new cars within the next three years. Currently these features are only available as an option on some models. The campaign also emphasises the importance of safer car and lorry fronts.

Since the proposal was raised, the ETSC and other safety-related organisations have written to the members of the European Parliament’s Committees on Internal Market and Consumer Protection (IMCO) and Transport (TRAN) to raise concerns over comments from the European Automobile Manufacturers’ Association (ACEA) that ‘active safety measures’ should “take priority” over passive safety measures as it claims that more crashes will be avoided in the future thanks to driver aids such as Automated Emergency Braking (AEB) and, further in the future, automated cars.

Now, the ETSC is running a social media campaign as it says the new legislation needs the support of Members of the European Parliament and the Member States of the European Union in order to be passed into law. This includes urging EU policymakers and national governments as well as organisations to to promote the message that the new EU vehicle safety standards will save lives.

Antonio Avenoso, executive director of ETSC, said: “By fitting the latest safety technologies as standard on new vehicles in Europe, we have the potential to dramatically reduce death and injury on European roads. It’s an opportunity EU Member States and the European Parliament must take. Crucially, this package includes several complementary technologies that share components such as forward-facing cameras. Cherry-picking or delaying individual safety features, or deprioritising essential crash protection measures that can save your life in the event of a collision, would cost more in the long run, a cost counted in euros, but also in lives lost.”

The Competitiveness Council (EU Ministers of Industry) is expected to give its view on the new proposals at its next meeting on 29-30 November. This will be followed by a vote shortly after in the transport committee of the European Parliament and, early next year, in the internal market committee (IMCO) of the European Parliament. The final text will then be subject to negotiations between the EU institutions.