Engenie gets funding for 1,500-strong rapid charger network that will offer ultra-rapid chargers capable of recharging an EV in 10 minutes, as well as a focus on fleets wishing to go electric. 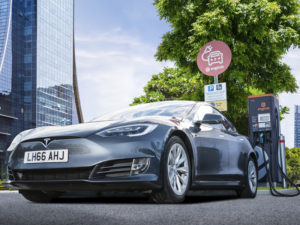 Engenie’s investment comes from Investec, which the company says will allow for 1,500 rapids including ultra-rapid chargers

Engenie is focusing on fleet owners who seek to transition to alternative fuelled vehicles, with the company stating: “Engenie is working closely with fleet managers who are looking to convert their fleets to electric vehicles. Engenie’s rapid charging technology offers quick-turnaround times, and Engenie provides free-of-charge advice and fully funded installation of all charge points, eliminating potential costs for fleet managers considering the move to EVs.”

The London-based company received capital investment from Investec, which should allow the business to reach its network target of 1,500 rapid chargers across the UK – which includes ultra-rapid charge points capable of recharging an EV in 10 minutes.

Europe’s Ionity network that includes sites in the UK is currently undergoing the rollout of 350kW chargers, as is the Dutch charge point operator Fastned, that will likely be of similar charge rate to Engenie’s.

As for the end users, Engenie will charge drivers a straightforward per-kWh rate, which covers the infrastructure and ongoing costs, with users able to via contactless credit/debit card or Apple Pay, which also offers in-built financial security features.