Electric Smart Fortwo, Cabrio and Forfour revealed ahead of Paris

Smart has revealed its electric Fortwo, Cabrio and Forfour models, which debut at the Paris Motor Show next week ahead of sales starting in early 2017. 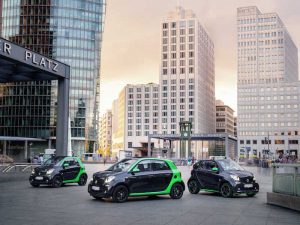 The launch of the new models marks the fourth generation of the carmaker’s electric drive, which is being featured in the Smart Forfour for the first time and brings improvements in charging time.

The latest Smart Electric Drive can also be charged up to twice as quickly as before – 2.5 hours for the UK and US – while the addition of a new optional fast charger reduces charge time down as little as 45 minutes.

As before, a ‘Smart Control’ app is also offered to enable drivers to control settings such as pre-entry climate control or intelligent charging remotely and has been updated with more operating options. A winter package with heated steering wheel will also be on offer.

The new models go on sale in early 2017, and first cars will arrive in the UK from September 2017.