Electric future: Where do we go from here?

By Alex Grant / 2 years ago / Features / No Comments

With the UK Government signalling an end to ‘conventional’ petrol and diesel sales by 2040, Alex Grant looks at how manufacturers are re-shaping their combustion engine line-up as the market moves towards electrification. 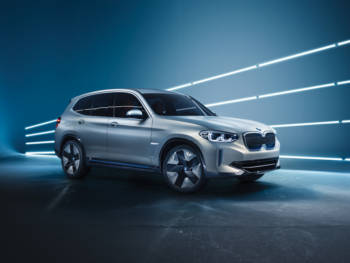 BMW Group is predicting a medium-term ‘decline in importance’ for combustion engines, but it sees long-term potential for improvements using 48-volt ‘mild hybrid’ technology. Year to date, its global sales include a 5.2% mix (82,977 cars) of hybrid and electric models – helped by widespread availability of plug-in hybrids across BMW and Mini brands.

Forthcoming 3 Series and X5 plug-in hybrids will offer a longer battery range, but it’s the fully-electric iX3 SUV and Mini hatch that will take the technology into the mainstream. Fuel-cell vehicles will follow in the early 2020s, though it says cost and infrastructure will suppress volumes until 2025.

Daimler says banning diesel is a ‘big mistake’, arguing that its latest-generation engines and software updates for older vehicles are delivering reduced NOx emissions, and that they have a role to play in cutting CO2 emissions too. Next year, it will introduce diesel plug-in hybrid versions of the C-Class and E-Class, as a best-of-both-worlds offer for fleets, while also broadening its ‘mild hybrid’ offer. However, it says no emissions are better than low emissions; the EQC electric SUV marks the launch of the ‘EQ’ sub-range next year, while Smart will drop combustion engines from 2020.

FCA will stop offering diesel passenger cars from 2021, citing a harsh regulatory environment over emissions – the fuel has already been dropped from the Fiat 500, 500L and 500X. Jeep (already 60% petrol-powered across Europe’s ‘true fleet’ market), Alfa Romeo and Maserati have confirmed plans to launch plug-in hybrid and electric versions throughout their ranges, and a battery-powered 500 is coming too.

Ford is rolling out new cylinder-on-demand EcoBoost petrol and EcoBlue diesel engines in its new models, but UK head of fleet, Owen Gregory, says there’s growing interest in the Mondeo Hybrid with UK businesses. The company more than doubled its global electric mobility investment earlier this year. A Transit PHEV, Mustang hybrid and 16 full EVs are due by 2022.

Honda’s global engine output is 97% petrol so, although it sees a role for diesel in the new Civic and updated HR-V, it will be phased out with new launches. A petrol hybrid CR-V and production version of the Urban EV concept are due in 2019, while European tests of the Clarity Fuel Cell are ongoing.

Hyundai UK president and CEO, Tony Whitehorn, says fleet demand is growing for plug-in hybrids, but the company doesn’t expect diesel engines to fall out of favour yet. It has hybrid, electric and fuel cell vehicles in the range already, but a new ‘family’ of petrol and six diesel engines is due by 2022, and the company claims internal combustion engines will still have a strong market presence in 2025.

Infiniti’s forthcoming QX50 SUV debuts a turbocharged petrol engine with a variable compression ratio, enabling it to prioritise high power or efficiency based on driver behaviour. Older models still use a Daimler-sourced 2.2-litre diesel, but a range of electric and range-extended electric models are en route, expected to account for half of its global volume by 2025.

Jaguar Land Rover will offer fully electric, plug-in hybrid and ‘mild hybrid’ versions of every new model launching from 2020 onwards, following on from the I-Pace electric SUV which debuted this year. It says these will be offered alongside ‘ultra-clean petrol and diesel engines’.

Kia says 45% of its European sales are diesel-powered, adding that combustion engines have an ongoing role despite growing demand for electrification. It’s adding a 48-volt ‘mild hybrid’ system to the 1.6-litre and 2.0-litre diesel engines in the Sportage and Ceed and will introduce all-new petrol and diesel units between now and 2022. Hybrid, plug-in hybrid and electric vehicles are already available.

Mazda believes 80% of cars will still have a combustion engine in 2035, so it is targeting ongoing improvements in the base technology before adding electrification. Next year, it will introduce the first Skyactiv-X petrol engines, using compression combustion similar to a diesel engine to improve efficiency and responsiveness, and all-new diesels will follow in 2020. The target is lower well-to-wheel CO2 emissions than an electric car. But it isn’t dismissing plug-ins – an electric vehicle with an optional rotary engine range extender is due in 2019, and plug-in hybrids will launch in 2021.

MG won’t be reintroducing diesel into its range. By 2021, the MG3 supermini will be joined by one electric and two plug-in hybrid SUVs, each with petrol alternatives, and an electric sports car.

PSA Group will include electric or hybrid versions in every new model launch starting next year, with all five of its brands (Peugeot, Citroën, DS, Vauxhall and Opel) due to have electrified products in every segment by 2025. The roll-out will be quick, with eight plug-in hybrids and seven EVs due by the end of the decade, including a battery-powered Corsa. PSA is also doubling production of its PureTech three-cylinder petrol engines in France, as well as expanding capacity with new factories in Poland and Hungary, to meet growing demand.

Renault-Nissan-Mitsubishi set out a five-year plan in 2017, which will move 75% of its global products onto shared drivetrains. This will include EVs with 400-mile ranges and 30% cheaper batteries, and alliance-wide use of Mitsubishi’s plug-in hybrid technology.

Combustion engines are still seen as a vital component, but with a diminished role for diesel. Nissan says the fuel has a place in the range for the short term, but will phase it out in favour of electric and hybrid technology as new models launch – likely to be complete by 2025. By that point, Nissan expects half of its European sales to be electric. Renault is developing ‘affordable’ hybrids and new petrol engines, recognising waning demand for diesel, but it also sees fully-electric cars as the best solution and is investing in increased supply.

SsangYong will introduce mild hybrid petrol drivetrains with the 2019 Korando SUV. It will launch a similarly-sized electric SUV in 2020, with four-wheel drive and a 280-mile range.

Suzuki no longer offers diesel engines in the UK, citing a 97% petrol mix and growing acceptance of petrol in fleet. Efficient petrol engines and ‘mild hybrids’ are the near-future focus.

Toyota and Lexus will only sell petrol and hybrid passenger cars in Europe by the end of this year, citing low demand for its diesel products. In 2017, hybrids accounted for 45% of Toyota’s UK sales, compared to 7% for diesel, while Lexus was 99% hybrid and hasn’t had diesel engines since 2012. Between January and August 2018, Toyota had also registered 29 Mirai hydrogen fuel cell vehicles.

Volkswagen Group says petrol and diesel will continue to be vital despite plans for range-wide electrification over the next decade. Ongoing development includes equipping all diesel engines with selective catalytic reduction (AdBlue), particulate filters for all petrol engines and investment in synthetic petrol and diesel fuel, produced using hydropower, which it says can make the combustion engine carbon-neutral.

By 2030, the Group will introduce 50 electric and 30 plug-in hybrid vehicles across its portfolio, including Lamborghini and Bugatti products, and anticipates around a quarter of its global sales will be plug-ins by that point. A dedicated, modular, electric vehicle platform will debut with a new Volkswagen in 2020, said to be as significant a technological shift as the original Golf replacing the Beetle in 1974. Seat will also launch a car based on the platform, alongside a plug-in hybrid Leon, while Audi and Porsche have co-developed a bespoke platform for electric sports cars.

Volvo has launched its last ever diesel car, the new V60 estate, with all future models set to be offered with ‘mild hybrid’ petrol, plug-in hybrid or fully electric drivetrains. Significantly, in Europe, this would mean the replacement for the V40 hatchback would have no diesel option, but the technology is likely to be available for most, if not all, of the seven-year lifespan of the recently-launched V60, XC60 and XC40. Volvo’s first electric car will launch in 2019.