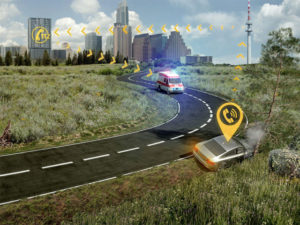 According to the European Commission, the automatic emergency call system will reduce response times by up to 40% in urban areas and even up to 50% in rural areas. The Commission estimates the technology could reduce fatalities in the region by 10%.

The system is designed to automatically call emergency response, including the vehicle’s location. In Europe, the system calls the standard emergency number 112. The system activates automatically as soon as an airbag is deployed. A driver can also manually use the feature, for example if they witness an incident.

The hardware sends a 140 byte “data telegram” including time of the emergency call, the vehicle type and location, the drive type, the number of passengers, the direction of travel, the way in which the emergency call was triggered and other information.