Encouraging car drivers and passengers to adopt the ‘Dutch Reach’ method of opening doors could help prevent a large number of cyclist injuries and fatalities a year, according to Cycling UK. 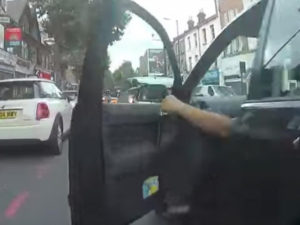 The campaign group is calling for a public awareness THINK campaign, aimed at all car occupants, to be run to help educate how opening car doors with the far hand, rather than the near can be safer. This method, sometimes called ‘the Dutch Reach’, as it is common practice in the Netherlands, enables the person opening their car door to look behind while also limiting how far their door will open initially.

According to Cycling UK, DfT figures from between 2011 and 2015 show there were 3,108 people injured, eight fatally, where “vehicle door opened or closed negligently” was a contributing factor in incidents attended by the police. Of this figure, 2,009 were cyclists, including five fatalities.

The charity has also called for driver training firms to promote the ‘Dutch Reach’ method and said the law should also be changed to include an offence of “death or serious injury through negligently opening a car door”. The current offence of ‘car dooring’ carries a maximum £1,000 penalty, even if someone dies or is seriously injured as a result of the incident.