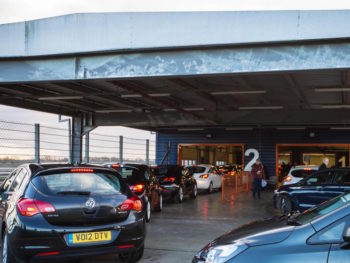 The remarketing specialist said in October that it was planning to turn Rockingham “into a dedicated defleet and vehicle remarketing fortress” and has now introduced an all-new dual lane, together with redeveloped inspection, valeting and presentation bays.

The opening event, held last Tuesday 15 January, saw more than £2.75m of end-of-term contract and lease vehicles sold for major leasing vendors, both in the hall and live online, with vehicles being purchased nationwide across the UK and Ireland. A total of 450 vehicles were at the launch with over 80% conversion at an average sale value of £7,513.

Michael Tomalin, managing director of City Auction Group, commented: “The launch event has been a major success and a first for the group, as we introduced dual lanes at Rockingham. The atmosphere in the auction halls at the inaugural corporate fleet and LCV auction was electric and massively different to the traditional single-lane sale events.

“We have huge aspirations at Rockingham to defleet and remarket over 100,000 vehicles per annum by 2022 and with over 250 acres of prime commercial coverage, we believe Rockingham will become a major automotive defleet and logistics hub”.

The next corporate sale event at Rockingham takes place on Tuesday 29 January 2019.