Following the launch edition ‘La Première’ DS 7 Crossback made available earlier this year, the French luxury car brand has announced a choice of trim, petrol and diesel engines for their new SUV that will go on sale next year, priced from £28,050. 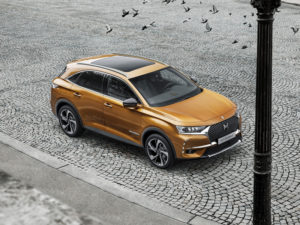 The range includes two turbo petrol engines: The 4-cylinder PureTech 180 or PureTech 225, both with an 8-speed (EAT8) automatic gearbox as standard and DS claim an average fuel economy of 48.7mpg.

All four engines are compliant with the latest Euro 6.2 emission control standard.

The DS7 Crossback falls into premium crossover territory, going head-to-head against the likes of the Audi Q3, BMW X1 and even some larger SUVs like the Audi Q5, X3 and Mercedes-Benz GLE.