The new Stockholm Declaration on Road Safety – which aims to halve road deaths globally by 2030 – shows the critical need for cooperation to cut risks on the world’s roads. 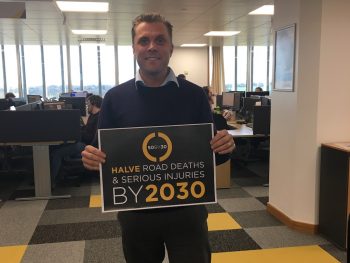 So says DriveTech as it lends its support to the ’50 by 30’ campaign theme, as orchestrated by the Towards Zero Foundation and used for the Stockholm Declaration.

The Declaration was adopted by delegates of 140 countries as the final outcome document of the Third Global Ministerial Conference on Road Safety: Achieving Global Goals 2030.

The programme encourages partners across the world – from regional agencies, national governments and policymakers, police organisations and other law enforcement agencies to commercial organisations and even members of the public – to support the campaign and to concentrate on methods to dramatically reduce road casualties and deaths. It sets out 18 measures that could cut road deaths, including a maximum road travel speed of 30km/h in areas where vulnerable road users travel.

Activity also takes in road safety enforcement, education and engineering, with DriveTech emphasising how the educational and training aspect could likely see driving behaviours changed for the better – through driver training interventions and other driver risk management programmes to the business community and through speed awareness courses to members of the UK public who have committed a driving offence.

Charlie Norman, managing director at DriveTech, commented: “We are delighted to see the momentum of the 50 by 30 campaign bear fruit in the form of the Stockholm Declaration on Road Safety. The Decade of Road Safety Action (2011-2020) provided a themed and positive focus for the last 10 years and we now enter a new decade with a very definite and renewed vigour. This new focus and aggressive ambition is something to get behind and DriveTech are very happy to support it.

“DriveTech trains drivers in the UK and around the rest of the world through DriveTech International, and we therefore see some of these casualty statistics first-hand but work hard to improve them where we can bring influence.”