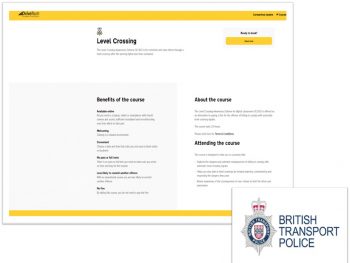 Earlier this year, Network Rail and British Transport Police warned of a dramatic increase in the number of people risking their lives at level crossing after a surge in people not using them correctly.

A number of lines reported increased near miss incidents during the UK lockdown; some have seen four times as many incidents compared to the same time last year.

DriveTech has been working with BTP since October 2011 to educate people on safe use of level crossings; more than 2,000 people a year go through the course.

For drivers, ignoring red/amber warning signs and/or barriers and proceeding to then drive over a level crossing is one of the most dangerous driving behaviours that places the driver/passengers of the train; members of the public and the occupants of the vehicle at significant risk of harm.

The renewed deal with BTP was awarded following a competitive tender that saw BTP describe DriveTech’s bid response as ‘excellent’ and awarded it a score to reflect a near perfect submission. BTP also commented on the delivery of customer excellence to the contract during the previous contract period.

Des Morrison, director of police & public sector business at DriveTech, commented: “We are thrilled to continue working with BTP to help educate people on the dangers associated with using level crossings incorrectly – after all, DriveTech is driven to keep people safe – both on and off the road. Level crossing offences continue to place public and passenger safety at great risk.”