Drivers are turning away from bus travel and increasingly resorting to using their cars, new Department for Transport data indicates. 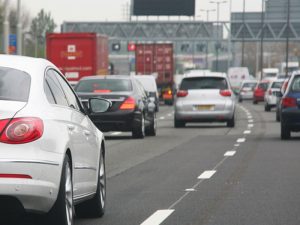 The latest road traffic estimates from the DfT show vehicle miles driven on British roads rose 1.3% to 327.1bn miles last year as traffic rose across all vehicle types – with the exception of buses. Car and taxi traffic grew by 1.1% from 2016 to 254.4 billion vehicle miles (bvm); the highest annual car traffic estimate ever. Overall, car traffic was up 5.9% compared to five years ago, 2.9% on a decade ago and 11.9% on 20 years ago.

Van traffic continued to grow more quickly than any other motor vehicle type, rising 2.7% from 2016 to 50.5 bvm while lorry traffic increased by 1.2% from 2016, continuing a trend of steady growth for the past five years. Pedal cycle traffic was 3.3 bvm, 28.2% above the figure 10 years before.

RAC roads policy spokesman Nicholas Lyes said: “The data reflects what motorists are telling us – that they are more dependent on their cars to get to work, visit family and friends and manage their daily lives than ever before and they are finding that public transport is failing to provide a reliable and effective alternative.”

Lyes also said that the drop in the number of miles driven by buses is a major cause for concern, and added that the UK should be increasing the number of services and their frequency at the same time as lowering fares in order to get motorists to see them as genuine alternatives.

He commented: “Despite drivers reporting that they are spending more on fuel and insurance, there is a genuine desire to use alternative transport options where practical.”

The largest share of car driver mileage in England was for commuting and business trips (38%) followed by 30% for seeing friends and other leisure pursuits, 16% for personal business, 12% for shopping and 3% for education.