Driverless car have interacted for the first time in public trials held by the Driven consortium. 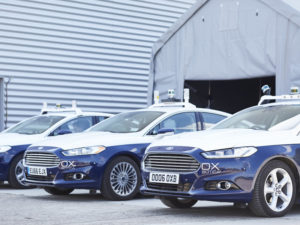 The cars use their array of lidar sensors, on board computers, and cameras, as well as Oxbotica’s Selenium autonomy and Caesium fleet tracking software to navigate

Based at the Culham Science Centre in Abingdon, a 2014 Ford Fusion Titanium hybrid and a 2017 Ford Mondeo hybrid were able to navigate the site autonomously, encountering pedestrians, cyclists and other traffic. This was enabled by the use of Selenium autonomy technology from Oxbotica – which is leading the consortium – along with Caesium fleet tracking software and lidar sensors, on board computers and cameras.

Commenting on the significance of the occasion, Driven project director and Oxbotica CEO Dr Graeme Smith said: “This is a significant landmark in the development of vehicle autonomy, which has always been about more than simply self-driving. This public trial demonstrates that our technology is able to share data and information that vehicles are then able to use to plot more effective routes, avoid potential hazards, and anticipate conditions more effectively. This will have huge implications on the way autonomous vehicles will operate and how the future of road travel in the UK looks, improving safety, efficiency and productivity.”

The consortium is also running urban autonomous vehicle trials around Oxford and will see a fleet of Level 4 autonomous vehicles being deployed in urban areas and on motorways, culminating in multiple end-to-end journeys between London and Oxford in 2019.