Drivers are being urged not to touch drink or drugs before getting behind the wheel as new research finds a worrying number of people think drink or drug driving are acceptable. 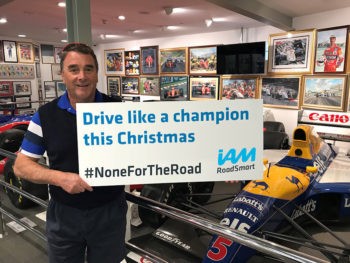 Research carried out for IAM RoadSmart’s 2018 Safety Culture Survey show there is still some shocking thinking about getting behind the wheel after drinking or taking drugs among UK motorists.

This year’s survey of more than 2,000 drivers found:

But, the research did find the majority support a tough line on punishment and rules around drink-driving:

In response, Nigel Mansell, who is backing the IAM RoadSmart ‘Drive Like a Champion’ anti drink-drive campaign this month, is calling on all drivers to not touch a drop of alcohol when getting behind the wheel.

He said: “Quite simply drink and drug driving is for losers. On the track you need to be in the best possible form at all times. This equally applies to anyone driving on the road. You have your own life, those of your passengers and everyone around you in the palm of your hands.

“Drink driving increases your risk of being a potential killer behind the wheel. The responsibility of driving a road vehicle safely is just as great as when driving a Formula 1 car – if not more so.”

He added: “Be a champion of the road like me this Christmas and New Year. Do the right thing for your family, friends and other road users. Drive safe, drive sober and go #NoneForTheRoad.”

Previous: Daytime running light check could make ‘important road safety difference’
Next: Business drivers regularly getting behind wheel while over the limit