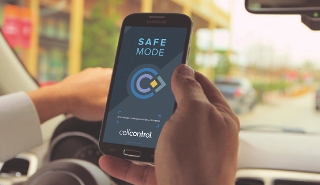 Already on sale in the US, the Cellcontrol DriveID product has been designed to take the temptation to use the phone away from the driver when behind the wheel, enforcing and policing the company’s corporate phone policy.

The system consists of DriveID, a solar-powered device that is fixed to the windscreen behind the rear-view mirror, which is combined with DriveProtect, an app that is loaded onto the phone and a web-based administration console. It takes just a few minutes to set up and then it’s ready to start protecting.

Using the web console, fleet managers can create mobile phone policies that replicate their own corporate  policy, determining if or how their phones can be used. For example, hands-free use can be allowed, as can the use of Sat Nav or even music. Or the phone can be locked down entirely.

Any attempt to tamper with Cellcontrol generates a notification that is sent to the fleet administrator, so they can rest, safe in the knowledge that their phone policy is being fully complied with.

Another USP is that DriveID can determine where the phone is in the vehicle, so passengers can be allowed to use their phones but not the person sitting in the driving seat. Calls to the emergency services are always allowed.

The optional DrivePerformance module provides information based on harsh braking, acceleration and speed which can be used for driver debriefs to discuss how to improve driving style. Smoother driving also equals better fuel economy so this should help the system quickly pay for itself. There is also an option to see a history of journeys that highlights driving incidents. iPhone, iPad, Android, Blackberry, tablets and even some laptops are supported.

Cellcontrol has been launched in the UK by G2M Technologies. MD Andrew Tillman said: “We specialise in bringing new fleet technologies to the UK market and we have been trying to find a distracted driving solution that actually works for over three years. Most are app-only, which means that the driver has control so they can circumvent them and none that we found are officially supported by Apple so they don’t work with iPhone. Others have a dongle that fits in the OBD port but these don’t fit all vehicles and can lead to vehicle warranty issues. Drive ID, however, works in any vehicle and with all popular smartphones so, once it’s fitted, fleet managers can be assured that their drivers are conforming to their mobile phone policy.”