Volkswagen has added a new petrol engine to the Golf line-up, said to offer fuel efficiency equivalent to a diesel engine. 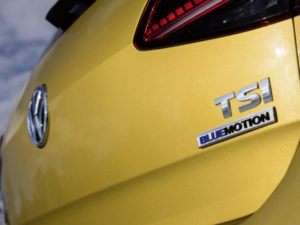 The new engine brings up to a 10% improvement in fuel efficiency compared to equivalent petrols.

Versions equipped with the dual-clutch automatic transmission can decouple and shut down the engine completely when it’s not under load, saving more fuel. On-board systems are supplied by an upgraded 12-volt electrical system, featuring a lithium-ion battery.

The result is an official NEDC combined fuel consumption in the Golf of 4.8 l/100 km (58.9mpg), rising to over 70mpg on the extra-urban cycle (for manual versions). The engine is also being added to the Golf Estate and will be rolled out on other Volkswagen models in the future.