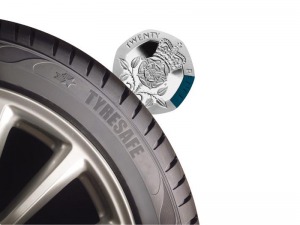 A tyre with legal tread depth should hold a 20p piece securely.

Tyre Safety Month 2016 has kicked off with some positive news from the Department for Transport’s Reported Road Casualties Great Britain (RRCGB) analysis, which reveals a reduction in casualties resulting from tyre-related incidents on Britain’s roads.

2015’s data shows a 28% decrease in the number of people killed or seriously injured in tyre-related incidents with total casualties falling by 16.2% when compared with 2014 figures.

That equates to a 44% decrease in all casualties caused by tyre-related incidents since the inception of Tyre Safety Month’s organiser, TyreSafe, in 2006.

While the news has been well-received, TyreSafe is urging drivers not to be complacent and ensure they carry out regular tyre checks. Despite the casualty rates falling there is no evidence that the number of tyre-related incidents, which do not result in fatalities or injury is decreasing, as this data is not captured in the DfT’s report.

As revealed earlier this year by TyreSafe’s survey of tyres at the point of replacement, in partnership with Highways England, there is evidence that the number of illegal tyres on Britain’s roads this year will remain at 10 million or more. Driving with illegal tyres leaves the driver vulnerable to a £2500 fine and three-point penalty, as well as being more likely to be involved in an accident.

According to the DfT’s figures, the chances of being in a tyre-related incident which results in fatality or serious injury is highest in the South East region, where 16.3% of all incidents were reported, while London was lowest at 3.9%.

TyreSafe’s annual Tyre Safety Month campaigns takes place every October to coincide with the onset of the worst of the British weather and acts as a focus for the UK’s tyre safety awareness charity’s year-round activities.

TyreSafe is encouraging motorists to take a photo of themselves while carrying out a tyre check and posting it either to facebook.com/tyresafeuk or use #TyreChecks on Twitter and include the charity’s handle @TyreSafe.

Previous: 6% of motorists have knowingly driven over the limit in last year, finds RAC
Next: Citroen SUV due in 2018, saloon to follow