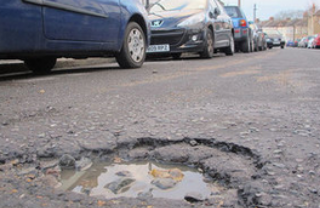 The funds, which were announced in the Autumn Statement and form part of the £250 million Pothole Action Fund included in last month’s Budget, will be split between 118 local authorities.

Local authorities in the South West will benefit the most, with a £8.4m share of the funds, while councils in the North East will get the least at £3 million.

Transport Secretary Patrick McLoughlin said: “I know how important well-maintained roads are to people across the country. Almost every journey starts and ends on a local road, so the government is giving councils £250 million specifically to tackle the blight of potholes in their area.”

However, Cllr Martin Tett, Transport spokesman of the Local Government Association, said: “While £50m is a step in the right direction, councils need more than 230 times that amount to cover the £11.8 billion cost to bring our roads up to scratch. The money announced today will help those councils receiving it to tackle potholes, but it would not even completely cover the cost of the £69m faced by the average authority to bring its roads up to a reasonable condition.

“Councils fixed a pothole every 15 seconds again last year despite significant budget reductions leaving them with less to spend on fixing our roads. Local authorities are proving remarkably efficient in how they use this diminishing funding pot but they remain trapped in a frustrating cycle that will only ever leave them able to patch up those roads that are inadequate.

“The condition of our roads is only going to get worse unless we address it as a national priority. The Government's own traffic projections predict a potential increase in traffic of up to 55% by 2040. Councils desperately need long-term and consistent funding to invest in the resurfacing projects which our road network desperately needs over the next decade.”

Matt Dyer, managing director of LeasePlan, added: “Filling in potholes is no substitute for modernising Britain’s road network. Part of the reason why there are so many potholes, in the first place, is because the roads are aged and decrepit. Only time will tell, but with the extreme wet weather, more cars on the road than ever, and the lowest fuel prices since August 2009, it’s looking more like potholes may be a permanent ongoing fixture on our roads.”