All cars and vans sold in the UK from 2040 will need at least full hybrid technology and the ability to drive only using electricity, the Department for Transport has confirmed, seeking to clarify points raised in the Air Quality Plan released earlier this summer. 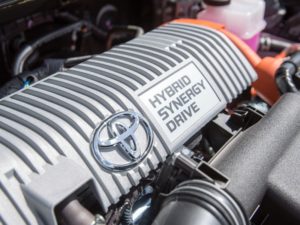 Hybrids will still be available after 2040.

It’s a clearer message than the plan itself, which outlined a target to “end the sale of all new conventional petrol and diesel cars and vans” by 2040. Widely misinterpreted as a ban on the sale – and in some cases the use – of vehicles with a combustion engine, the ambiguity of that statement could also have meant mild hybrid vehicles, which use a low-power electric motor to assist a petrol or diesel engine, would still be available after this date.

Neither is accurate. Speaking at the Energy Saving Trust’s Fleet Heroes Conference in London yesterday, Vicky Edmonds, private secretary to minister of state at the DfT, said there had been “lots of confusion” around the announcement since the summer, adding that ambitions hadn’t changed since the coalition government’s Carbon Plan of 2011.

“We are clear that we’re talking about zero-emission capability,” she explained. This does include full hybrids such as the Toyota Prius, which have a short electric range, but excludes mild hybrids which have been lumped into manufacturers’ “electrification” plans multiple times during this summer.

The Carbon Plans set out proposals for “almost every” car and van on the road to be an ultra-low emission vehicle by 2050 – after requiring all new cars and vans to be “near-zero emission at the tailpipe” by 2040. That’s backed up by the Clean Growth Strategy, released last month, which suggested at least 30% of new car sales and up to 40% of new vans could be ULEVs by 2030.

“It’s an industry-led ambition, we don’t have any intention, as government, to step in. We’re working with industry on how we achieve that,” she said. “It’s well known that the environmental impacts of road transport are significant, accounting for 21% of UK greenhouse gas emissions. So when you look at our Clean Growth Strategy the focus is increasingly shifting towards transport.”