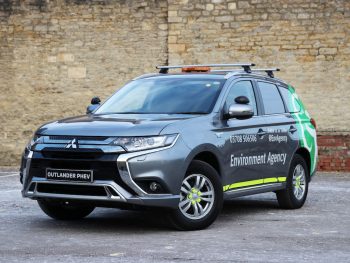 DEFRA has increased its Mitsubishi Outlander PHEV order to 96 vehicles

The department originally ordered 16 vehicles in April 2020 and subsequent orders have now ramped this up to a total of 96 vehicles.

DEFRA chose the Mitsubishi Outlander PHEV based on its practicality and driver comfort but also the vehicle’s environmental credentials; it has official WLTP fuel economy and emissions figures of 139.7mpg and 46g/km respectively.

While the goal is to ultimately go fully electric, DEFRA said the Outlander PHEV provides an excellent interim means of reducing its emissions and running costs.

It’s also making sure the vehicles are designed by requiring drivers to fully charge them every evening, ensuring drivers have access to the model’s electric-only range of 28 miles, particularly in Clean Air Zones, or to the combined electric and petrol power range of 372 miles for longer journeys.

David Rodriguez, sales & marketing director at Mitsubishi Motors in the UK, said: “While Mitsubishi Motors fully supports the move to carbon-neutral transport in the future, it has pioneered and championed the PHEV as an important transitional technology. Recent studies have shown that 70% of Outlander PHEV owners are now considering a fully electric vehicle for the next purchase, compared to just 27% of surveyed drivers of conventionally-powered Mitsubishi vehicles.”