Defra is replacing more than 400 diesel company cars with Toyota Auris Hybrid models in line with plans to switch to cleaner vehicles across its fleet. 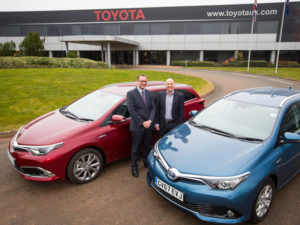 The changeover will see the vehicles replaced with the Toyota Auris Hybrids over 2018 in a rolling replacement process.

Defra currently has around 4,000 cars on its fleet of which around 98% are reported to be diesels. It has previously pledged to only buy hybrid or electric vehicles from 2025.

The Auris Hybrids will be used by the Environment Agency, Marine Management Organisation, Rural Payments Agency and Animal and Plant Health Agency.

Jim Gregory, strategic fleet manager for Defra Group Fleet Services, said: “The cars from these four Defra organisations already represent one of the lowest CO2-emitting fleets in the UK and we have reduced nitrogen oxide gases (NOx) emissions, linked to respiratory illness, by nearly 10%, and CO2 by nearly 30%, across our 7,000 cars, commercial vehicles, plant and machinery.

“We’re balancing a challenging ambition against the needs of our vehicle users, while keeping a close eye on new and emerging technology which can help us reduce our harmful emissions even further without increasing our costs.”

Toyota announced at last month’s Geneva Motor Show that it’s phasing out all diesel models by 2019. This includes the new-generation Auris – debuted at Geneva – which will be offered only with petrol and hybrid powertrains. Toyota has since confirmed the new RAV4 will drop the 2.0-litre D-4D on the current engine line-up.

The move comes as Toyota reports growing uptake of its hybrid models. Alan Barrett, Toyota manager for public sector and fleet development, said the carmaker’s hybrid fleet sales increased by more than 40% in 2017 and the trend is continuing into 2018 as both large and small fleet operators discover the cost and eco benefits of the technology.

FIND OUT MORE at the Fleet Show about how Toyota’s hybrid vehicles can help reduce your fleet’s overall CO2. Register to attend FREE today: thefleetshow.co.uk