Organisations have just a fortnight left to enter the 2019 Prince Michael International Awards, which recognise the ‘most outstanding’ road safety initiatives. 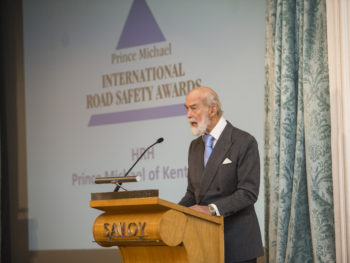 First established in 1987 by HRH Prince Michael of Kent, the awards cover five main categories based on the five pillars of the Global Plan for a Decade of Action: road safety management, safer roads, safer vehicles, safer road users and post-crash response.

The winners are invited to the awards’ luncheon held at The Savoy in London – which this year takes place on 10 December – where Prince Michael announces his Premier Award winner.

Nominations are open to any team, public or private sector organisation, government department, or business and close at the end of July.

Last year’s awards saw Project Edward (European Day without a Road Death) – a low-cost campaign run in a partnership between police forces and road safety stakeholders across Europe – gain the Safer Road Users accolade while the AA Charitable Trust was recognised for a decade of road safety campaigns and Renault earned recognition for its Your Ideas Your Initiatives global education programme.

For more details and to make a nomination in the 2019 Prince Michael International Awards, click here.