Day in the life: the RAC

It’s one of the most common breakdown callouts, but misfuelling needn’t live up to the horror stories. We took a ride with one of the RAC’s Fuel Patrol team to find out more. 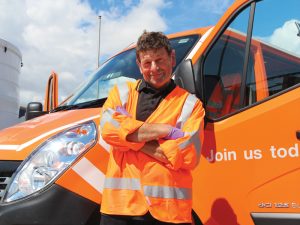 Misfuelling is one of the top 10 reasons for RAC callouts

Few motoring problems are quite as frustrating as realising you’ve put the wrong fuel in the tank. Not only for the potential damage, but also the prospect of having to own up to it. Yet it’s probably more common than you think; misfuelling is one of the top 10 reasons for RAC callouts.

In 2015, the RAC’s Fuel Patrol team (some of whom will be supporting competitors in this year’s MPG Marathon) attended 30,000 incidents. Most involved unleaded in diesel tanks, because it’s much easier to get the thinner nozzle into the large diesel tank aperture opening.

Around a third are business customers; either company car drivers with RAC cover, or motorists covered under schemes such as Motability.

“If you try really hard, you can get a diesel nozzle into an unleaded tank, you do see it, but we wouldn’t recommend it,” says RAC Fuel Patrol Richard Broad.

Broad has been a Fuel Patrol for five years, following four years as a roadside patrol, so there isn’t a lot he hasn’t seen.

Part of a 30-strong team, Broad and his specially-equipped Renault Master van are based out of Weston-super-Mare, North

Somerset. Fuel Patrols play a dual role during quiet periods, able to attend callouts such as wheel changes and flat batteries, but around a third of the van’s load area is taken up by a safety-segregated section containing fuel draining equipment, pumps and a storage tank.

After logging on to the RAC’s network from his van’s on-board laptop, he gets the details for the first job of the day, in Street, near Glastonbury. It’s a company car driver who has filled up his diesel engine SEAT with unleaded.

“Fortunately he’s realised before starting the engine, so it should be straight forward to drain the tank, and get him going again,” says Broad. “Sometimes you speak to people and they have this idea that you have to take out the engine and strip it down, cleaning out all the parts and spend a day’s labour to do it. The reality is much less scary, but it does depend how far you’ve driven as to how much damage it can do.

“The best outcome is a case like the one we’re going to where the customer hasn’t started the engine, so the fuel doesn’t have the opportunity to get pumped around the engine and do any damage.” His advice is clear; if you realise you’ve misfuelled, don’t start the engine, and call the RAC before you do anything. But even if you do drive off and only realise when the engine starts to make the customary strange noise that goes with a misfuel, or simply grinds to a halt, the chances are it can be dealt with.

“In all the time I’ve been doing this job, there has only been a handful of occasions when the damage was so bad the car couldn’t be started again,” says Broad.

“Although there was one occasion where somebody had managed to drive from London to Bristol, ignoring the banging noise the engine would have been making at the time.

“It’s very much part of our philosophy to approach every breakdown with the aim of getting the customer back on the road.

There are times when there is no option but to tow the vehicle, but personally I feel like I haven’t done my job if I can’t get it going again.”

On an average day Broad will attend six to eight misfuelling jobs which can be anywhere within the South West patch that he and his colleague cover between them – an area which covers South Wales and Cornwall.

As we reach the garage forecourt for our first customer of the day, he offers the following insight: “I’ve found two things are true when it comes to misfuelling. One is that more men do it than women. The second is women are much more likely to own up to their mistake. It’s interesting that men spend a fair bit of time trying to blame it on everything else.”

The process is straightforward. With the car moved away from the pumps, Richard sets up a safety perimeter before draining the full tank of unleaded into the van’s storage tank, then uses fresh fuel to clean the vehicle’s lines. Much to the customer’s relief, the engine starts and he’s on his way.

By now Broad has a few more jobs queued, and the mileage is beginning to stack up. “Attending a misfuel is different to a roadside breakdown because quite often the customer is happy to arrange a time that suits them,” he explains as we cross the Severn Bridge towards the next job in Tonypandy, South Wales.

“With a roadside breakdown there is obviously an urgency to reach the customer because they are in a potentially vulnerable situation at the roadside, but very often with a misfuelling job the customer has been towed back home, or driven home themselves and then realised what’s happened. As a result our geographical area of operation is much bigger.”

By now the storage tank in the back is starting to get full and, with several more customers still to attend Richard needs to make a pit stop at a designated facility at Avonmouth to dispose of the waste fuel.

Minimising waste, this drained fuel is recycled and reused.

It’s getting towards the end of the working day now for a lot of people, around 5pm, but Broad still has many miles to cover. After a brief stop in rural Somerset to get a Motability customer back on the road, it’s out to the South West to Sidmouth, then Exeter, before coming back up the M5 to the final job in the town of Nailsea, near Bristol. A typical day, and thankfully not hindered by the South West’s heavy holiday traffic, something he says requires a little more planning.

In all we’ve covered a distance of roughly 400 miles, visited five counties and boroughs, two countries and drained hundreds of litres of waste fuel to keep people moving. And tomorrow, Broad will be doing it all over again.

Litres of fuel drained by the RAC every year

Of callouts are petrol in a diesel tank