By Colin Tourick / 3 years ago / Features / No Comments

Professor Colin Tourick examines the backlash against diesel and weighs the alternatives. 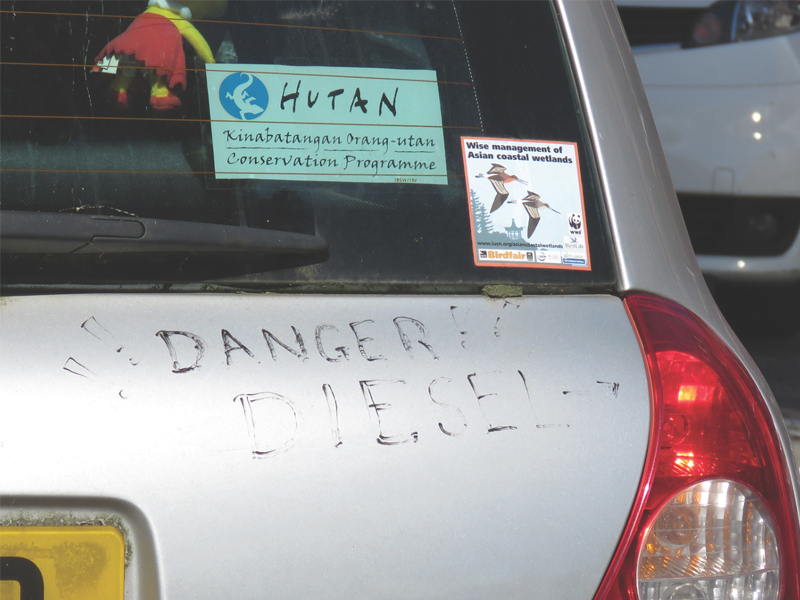 Strolling through a leafy London suburb, I happened to notice a parked car onto which someone had written the words “Diesel Danger”. As I had been planning to write about diesels this month this was too good an opportunity to miss, so I whipped out my camera and started taking photographs.

I then noticed Bill Oddie standing next to me (yes, really, and if you are under 30 I’m sorry if you don’t know who I’m talking about). He was wearing a facial expression that said “Who the heck are you and why are you taking photographs of my car?” I introduced myself and explained that I was taking the photos to accompany this article. He said “Will you be able to do anything about the scourge of diesels?” and I said probably not, but I would try. He then smiled and invited me to look at the other side of the car, on which he had written “They said it was safe….”.

He’s right of course, they did tell us diesels were safe. When the tax system was altered to take account of engine emissions, companies changed their car schemes to favour diesels because this was the environmentally-friendly option that saved NI for the employer and income tax and NI for the employee.

The problem was, whilst reducing CO2 would save the planet, an increase in the number of diesel cars would boost the quantity of oxides of nitrogen (NOx) being pumped into the atmosphere, and NOx is a pollutant that kills.

We now have a perfect storm brewing. Diesel is a dirty word, the fuel has no friends in the corridors of power, the Transport Minister has already warned people off buying diesel cars and from 23 October Sadiq Kahn, the Mayor of London, will introduce a £10 toxicity charge for cars, vans, minibuses, buses, coaches and HGVs not meeting Euro 4 standards.

DEFRA lost a High Court case in May as a result of which it was required to publish its draft plans for addressing the problem of nitrogen dioxide. We learned from this that the government likes the idea of local authorities introducing clean air zones (but isn’t too keen on motorists being charged to drive into them), expects Birmingham, Derby, Leeds, Nottingham and Southampton to introduce clean air zones by 2019 and wants dozens more towns and cities to follow suit soon after. The much-discussed diesel scrappage scheme is still being considered, though if introduced it would clearly have to be focussed on removing the most polluting vehicles only otherwise the cost would be astronomical (£60bn were every diesel car and van to be scrapped). 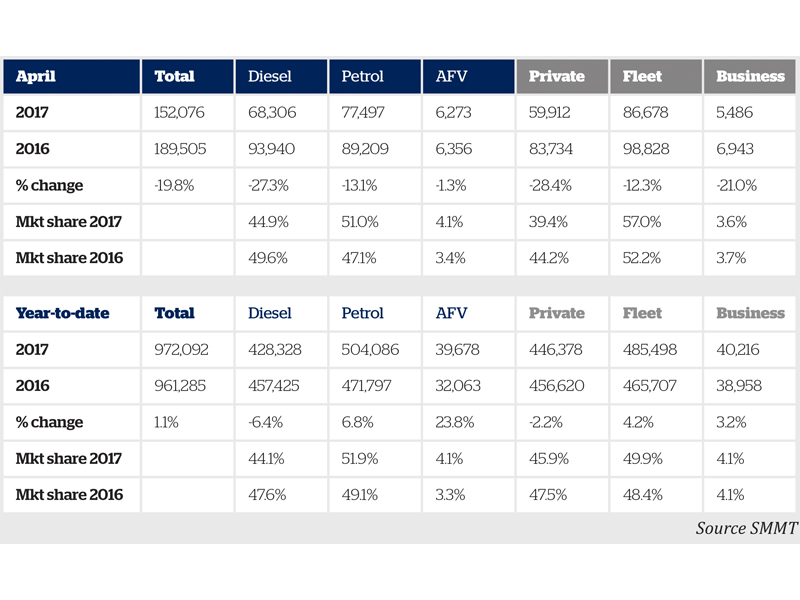 For fleet managers, the key line in the report was buried in clause 54: “The Government will continue to explore the appropriate tax treatment for diesel vehicles and will engage with stakeholders ahead of making any tax changes at Autumn Budget 2017”.

Whilst civil servants are not allowed to speak publicly on matters affecting policy in the run up to the election, the mood music coming out of the corridors of power is not that encouraging for fleet managers. The government urgently wants to reduce the number of diesel cars on the road. As someone told me, “They are looking at everything: Benefit-in-Kind tax, vehicle excise duty, writing down allowances, AMAP rates, National Insurance, everything.”

Whilst sales of diesel vehicles are down 6.4% year-on-year, there were still more than 400,000 diesel cars sold in the year to end April 2017 and the government thinks this number is too high.

As it happens the blanket ‘diesel is bad’ analysis is a bit unfair on car manufacturers, who have reduced NOx and other emissions in line with the latest Euro 6 standard, which makes new vehicles cleaner than ever before. 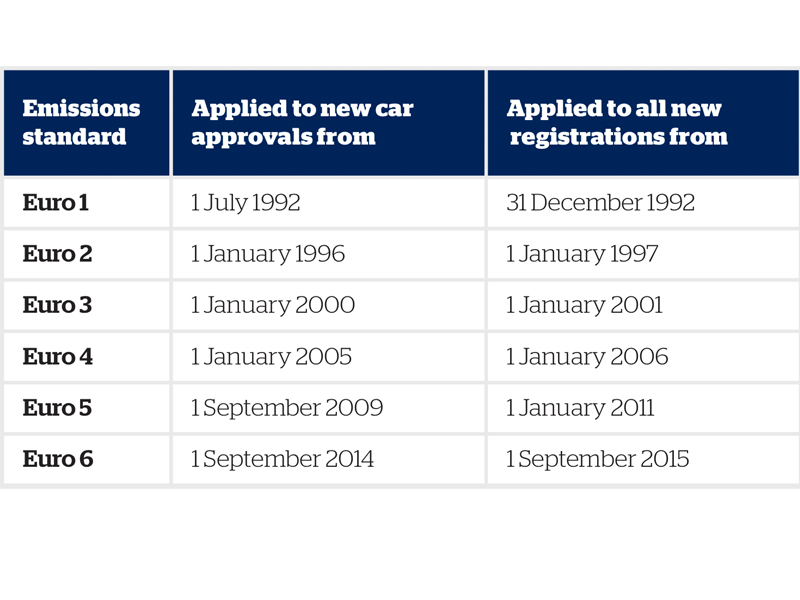 Euro 6 was implemented for new vehicle approvals on 1 September 2014, and all new registrations had to comply with Euro 6 standards from 1 September 2015. So a significant proportion of existing fleet cars now emit very low levels of NOx indeed, as the charts on the right show.

However, you can be sure that as more members of public hear the message ‘diesel is bad’ they will be less inclined to buy used diesel cars. This can only reduce residual values and lead to an increase in lease rentals (or depreciation for fleets that buy their cars or fund them via hire purchase).

Which takes us to the key question for fleet managers: given that the government is so keen to discourage the use of diesel cars, how can fleet managers protect their companies (and employees) against rising costs? The obvious answer is to start looking seriously at the alternatives.

Whatever changes the government introduces we can be sure they will still be committed to reducing CO2. The need to reduce global warming isn’t going to go away, so the safe bet is to look for low-CO2 alternatives to diesel-engined vehicles. 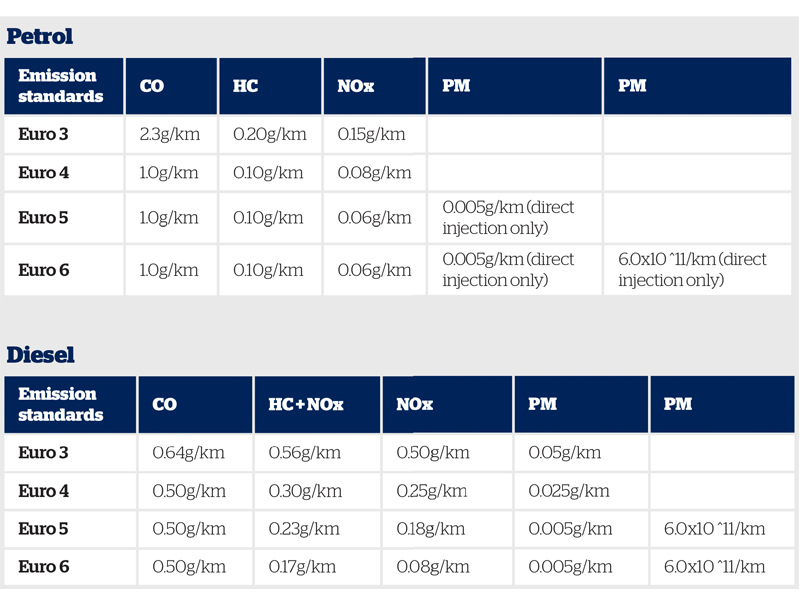 And there are a lot to choose from these days.

For example, smaller, petrol-engined cars. Many manufacturers have done a great job in making smaller power units that are lighter but more powerful. Some of these cars deliver very good performance with low CO2 and NOx output.

If you haven’t yet added hybrid vehicles to your fleet, now is the time to consider these. Low emissions, high mpg, proven technology and pretty high residuals (which deliver low rentals). What’s not to like?

You don’t have any plug-in electric cars on your fleet? Range anxiety can be an issue with battery-powered vehicles, but if you analyse the journeys your employees are driving you may well find employees for whom an electric car would work most of the time, except for the occasional journey that could be handled in a rental car or pool car. Most of these cars are still expensive to buy, even with the government grant, but the cost of the fuel is tiny compared with filling up at the pump.

This sort of analysis is valuable at any time but could be particularly valuable now that we know the government has diesel in its cross-hairs. Looking at your attitude to diesel now could make a lot of sense.