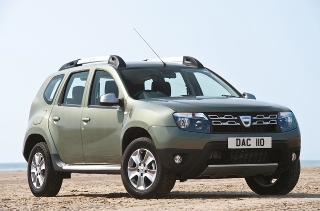 Under the changes, the Dacia Duster gains a new Euro 6-compliant 1.6 16V 115 petrol engine, which replaces the previous 1.6 16V 105 engine and brings improved performance as well as significant improvements in fuel efficiency and running costs. For 4×4 versions, CO2 emissions tumble by 30g/km to 155g/km, while official combined fuel consumption has been reduced by 6.2mpg and is now 41.5mpg. There are substantial gains with 4×2 models, too: CO2 falls by 20g/km to 145g/km and fuel economy improves by 4.3mpg to 44.1mpg. As a result BiK is four bands lower with all-wheel drive and two bands lower with front-wheel drive.

The increase in power and torque also raises the towing capacity of 4×2 versions from 1,200 to 1,500kg so that it is now on a par with that of the 4×4 versions.

There are also reductions in fuel consumption and emissions for Duster models powered by the dCi 110 turbodiesel engine, which now meets Euro 6 emissions standards. Official combined fuel consumption is now 64.2mpg (-7.7mpg) in 4×2 models and 60.1mpg (-6.8mpg) in 4x4s; CO2 emissions are down to 115g/km (-15g/km) and 123g/km (-12g/km) respectively; and every model is one band lower in the VED and BIK scales.

There are also improvements to the fuel economy and emissions of most models in the Sandero family and the Logan MCV with the adoption of the new Euro 6 engines.

The 1.2-litre 16V 75 engine in the Sandero and Logan MCV now offers a reduction in CO2 emissions from 135g/km to 130g/km along with improved performance. Fuel economy is unchanged at 48.7mpg.

The 0.9-litre TCe 90 engine is available in all three models and brings increased torque and Stop & Start now as standard. CO2 emissions are down by 7g/km to 109g/km in the Sandero and Logan MCV, and by 9g/km to 115g/km in the Stepway, while the respective fuel economy improvements are 1.2mpg to 57.7mpg, and 3.1mpg to 55.4mpg.