Dacia has updated its second-generation Duster SUV with a new design and extra equipment. 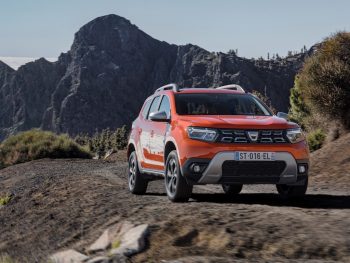 On sale from the summer, the update model includes new LED lights and a revised grille design for the exterior, in line with the changes already made to the Sandero and Sandero Stepway. It also debuts a new Desert Orange bodywork.

The cabin has also been tweaked, improving comfort and design, and gets new upholstery, new headrests, and a high centre console with a wide retracting armrest. Available on selected models, this houses a 1.1-litre storage compartment and two USB charging sockets for the rear passengers.

Automatic climate control with a digital display, heated front seats and a hands-free card are available on higher-specification versions.

The 4×4 version also includes a 4×4 Monitor system showing core information such as pitch angle and compass.

The updated Dacia Duster is on sale from late summer, with prices to be announced closer to launch.

Previous: Volvo expands XC40 Recharge electric SUV line-up
Next: Comment: 10-year wait comes to an end. Or does it?